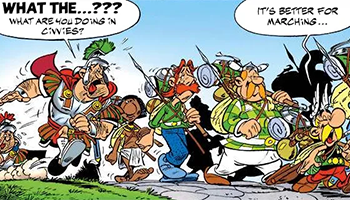 "...and drinking, and gambling, and sightseeing..."
"We do not prop ourselves up on ceremony in the [Aerial] Corps, whatever you may have been used to in the Navy."
— Lt. John Granby, His Majesty's Dragon
Advertisement:

A lot of the time, military forces in the media don't really seem all that military. The characters get to wear neat uniforms and live in a Cool Ship or base, but don't have to deal with the strict hierarchy, discipline and training that exists in the Real Life military. They do not have to shave their faces and their hair can be styled in any way you'd see on a civilian. A Military Maverick who disobeys orders is likely to receive no harsher punishment than getting assigned to Peeling Potatoes, a stint in the brig, or at worst being "disciplined" (i.e. Punched Across the Room) by a superior officer. It seems like the only thing keeping them together is The Code.

While we would like to assume such organizations are highly disciplined in real life, the reality is it will vary depending on the service in question and the situation they are involved with. It can be justified as not being a standard military but is a combined military/civilian organization, a special operations group whose members usually operate independent of the regular chain of command (and possibly of each other), or is a group that merely uses a vaguely similar infrastucture and rank system. Sometimes, the work is set in a time or place where military organizations were just not that disciplined (e.g. The Dung Ages). Most of the time, it appears to be the result of lack of experience on the part of the production on how the military actually operates.

And sometimes, the apparent lack of discipline is the whole point: some military organizations in fiction land are not disciplined because they do not need discipline to begin with. Either the members are competent or simply badass enough so that "normal" discipline is not necessary any more, or the common cause they are fighting for and/or the charisma of their leader is enough to ensure their efficiency when it is time to get serious; in such cases, the Mildly Military organization is actually a group of True Companions with the size and the firepower of a standing army. If well written, it can impress the audience by letting the apparently laid back characters show just how frightfully competent they really are and even make a valid point. Done poorly, it can quickly fall into the realm of Fridge Logic.

Contrast Army of Thieves and Whores, where the army in question truly is an undisciplined rabble. Compare Artistic License – Military when there is an attempt at military protocol but something is still off.