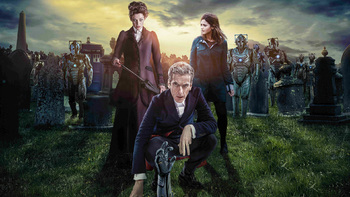 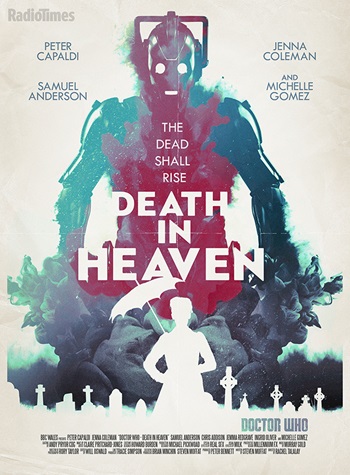 One grave situation for humanity, situated in its graves.
"I had a friend once. We ran together when I was little and I thought we were the same. When we grew up, we weren't. And now she's trying to tear the world apart and I can't run fast enough to hold it together."
— The Doctor
Advertisement:

The one where the Brig came back... as the Cyber-Brigadier. Then left to parts unknown... probably to go find a new mustache and a uniform that fits the new robot body.

Written by Steven Moffat. Part 2 of the two-part finale to Series 8.

By the end of the last episode, Danny Pink was dead and a dozen Cybermen were clanking down the steps of St. Paul's. The Master — the Mistress now, or "Missy" for short — had revealed herself with a flourish, and the Doctor was left to stare as a full-scale alien invasion descended upon the Earth. And Clara Oswald was left trapped in a room, with a Cyberman rapidly approaching...

But not according to Clara, much to that Cyberman's confusion. In fact, there's never been a Clara Oswald. She's a ruse, a trick, a stitched-together history and a pseudonym. For who? Exactly. You can call her the Doctor. Again. (And this time, even the opening credits are altered to place Jenna Coleman's name first, and include her eyes in place of Peter Capaldi's.)

Meanwhile, back at St. Paul's, a flock of tourists descend to gawp and gaggle at the shiny metal men. The Mistress is amused, and quickly flicks through various video feeds to show more and more clusters of them, in every major city in the world. One of the tourists steps forward to take the Doctor and Mistress's picture, a familiar-looking woman in a spiffy-looking bowtie and familiar Converse... Osgood. And just like that, the "tourists" whip out their guns, and UNIT springs into action. Out comes Kate Stewart, decidedly unimpressed at this whole "Cyberman apocalypse" thing — they tried it forty-six years prior, didn't work then, and UNIT's specifically built anti-Cyberman weaponry from the remnants of their dead in case they tried to stage a repeat. In response, the Cybermen... fly off with shiny new rocket boots. Several more spew from the Cathedral itself, ninety-one in total — one for every city in the British Isles.

Then they all blow themselves up.

That seems like the end, then, but it really really isn't — Cybermen adapt, and UNIT aren't the only ones weaponizing the dead. From every exploded Cyberman, a cloud of thick, black smoke soon begins to spread, spilling over the graveyards first. Dark water begins to pool around every tomb, every gravestone, every funeral home, and soon freshly-converted silver corpses begin to rise from the mire. One of them used to be called "Danny Pink".

Kate has both Missy and the Doctor tranqued — Missy for the obvious reason, the Doctor because she doesn't want to risk him getting bored and wandering off before the world's been saved — and taken aboard Boat One (an airborne UNIT base a bit less Helicarriery). As it turns out, after the Harold Saxon business, the governments of the world decided to automatically make the Doctor acting President of Earth (whether he wants to be or not) should another global UNIT-level disaster occur. The Doctor, in between complaining about being saluted at and declaring that he's never going to salute back (although he admits to Kate that he would have done it for her father if he'd realised how much it would have meant to him), quickly figures out that Missy has been using modified Matrix technology to store human minds for as long as humans have believed in an afterlife. Meanwhile, Osgood, who was just being offered a companion position by the Doctor for being generally clever and awesome today, finds herself guarding Missy.

Let's see: Just offered a spot on the TARDIS, guarding Missy. If you guessed Osgood finds herself on the end of Missy's disintergrating PDA, collect your winnings after the recap.

Clara, meanwhile, isn't actually the Doctor. She can't keep that bluff up for very long, even with the detailed knowledge of the Doctor's life she's picked up over time, but she doesn't need to — Danny, now a Cyberman but with his original memories and emotions intact, takes her away from 3W and into a graveyard, where the corpses are already being cyberconverted by the Cyber-pollen. Their programming hasn't kicked in yet, and he begs her to turn on his emotional inhibitor so he's not in pain anymore. The Doctor is interrupted in his emotional conversation with the Mistress when Clara calls him, asking him to help her. But the Doctor refuses — not only because he knows that fully converting Danny will make the Cyberman kill her, but also because Danny's link to the hivemind can help save the Earth. Missy merrily reveals that she was the woman in the shop who put Clara and the Eleventh Doctor together (because she loves to see the uncontrollable Doctor being controlled by such a control freak), then ruptures the plane, gets Kate flung out into the sky, and orders her Cybermen to kill some Belgians for the sheer hell of it.

While Missy teleports out, the Doctor is thrown out into the open sky along with the TARDIS, and only survives by making a controlled dive towards his ship mid-fall. Seb (who turns out to be an AI interface) looks on in admiration. Missy wearily disintegrates him, mid-squee.

Down on Earth, Danny reveals that he can only access the hivemind once he's converted; the Doctor knows that he has no choice but to turn on Danny's emotional inhibitor forever. He can't bring himself to do it, and Clara takes the sonic and performs the act herself.

The Mistress joins them in the graveyard, in grand style, and reveals her plan... the rain will kill all humans on Earth, then convert them into more Cybermen. And the Cyberman troops are meant for the Doctor. He can use it to win every war, to liberate all the slaves in Dalek camps across the universe, to settle every dispute in his favour. She wants to see him lead an army, wants to make him admit that he's just like her, that he needs to feel in charge. Because she just wants her old friend back. The Doctor, suddenly understanding, finds in her words the answer to his question: is he a good man? He gets down on his knees for her and kissing her, very gently, in thanks, he explains to her that he isn't. And he's not a bad man either. Or a general. Or a president. Or a hero. He's just an idiot with a box and a screwdriver, helping, learning.

He throws Missy's control bracelet to Danny (who's still holding firm against cyberconversion with The Power of Love, which is not an emotion but a promise) and Danny is able to lead the army of Cybermen into the clouds, making a Heroic Sacrifice to destroy all the dark water once and for all.

In the midst of this, the Mistress gives the Doctor a present: the location of Gallifrey. It's in the one place the Doctor hasn't thought to look — back at its old coordinates where it had always been before the Time War.

Clara has surreptitiously taken the Mistress's death ray, and doesn't plan on letting her get away to come back with a new atrocity next week — instead, she's going to murder the Time Lady in cold blood. The Doctor won't let her. Not because he can't bear to see his old friend die, but because he can't bear to see his companion become a killer. He promises Clara that if that's what it will take to dissuade her, he'll kill the Mistress himself.

The Mistress mocks him: such a sacrifice, to save Clara's soul. But who will save the Doctor's soul? She gets her answer in the form of an unexpected death ray from offscreen, which (apparently) disintegrates her on the spot.

There's one Cyberman left — one Cyberleader who has not only just zapped the Mistress, the Doctor and Clara discover, it's also taken the time to catch Kate Stewart when she fell from the doomed aircraft and bring her safely to earth. And Kate is muttering about her dad... yep. Once upon a time, the Doctor met a man, a man of unquestionable courage, a man of grit, and a man of honour. This man helped saved the universe on many, many, occasions, so would anyone be that surprised that not even death itself would prevent the late Sir Alistair Gordon Lethbridge-Stewart from coming to the Doctor's aid one final time? Like Danny, and demonstrating the will to break free of Missy's control, because he's still very much the iron-willed Brigadier he was in life, he Doctor realises his old friend is standing before him, and he now has the chance to say good-bye. The Doctor gives his old friend a first and last salute, and the cyberconverted Brigadier nods his head in acknowledgement, then rockets into the sky and out of sight.

Clara tries to go back to her normal life, only to hear Danny's voice in her apartment one night. He still has that control bracelet and it's good for one trip back from the afterlife. But instead of coming back himself he sends through the child that he killed in the war, asking Clara to take care of the boy, and says his final goodbye.

The Doctor seeks out Gallifrey's coordinates and to no one's shock, Missy trolled him; it's still in the pocket dimension he left it in at the end of the Time War. In anger, he flies into a violent rage against his TARDIS console and soon after breaks down crying.

He and Clara meet up at a café for their final goodbye. Seeing her depowered control bracelet, which she's wearing as a memento, he assumes that she and Danny are happily back together now. And that there will be no place for a TARDIS and a Doctor in her life. Before she can correct him, he tells her that he's found Gallifrey, and he'll be living there from now on, so there's little point in her and Danny being bothered by him anymore. They share a final hug, on Clara's insistence, neither willing to admit their lie.