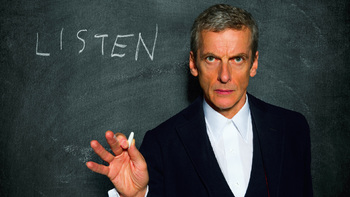 Perk your ears. Face your fears.
Click here to see the Radio Times magazine poster for this episode: 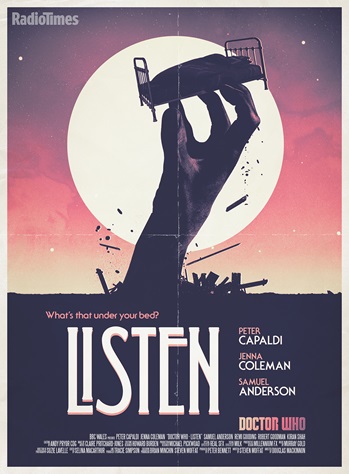 The Doctor's TARDIS is Bigger on the Inside...but how big is that bottomless shroud of darkness under your bed? Answer: big enough to hide one heck of a Boogeyman.
"What's that, in the mirror and the corner of your eye?
What's that footstep following but never passing by?
Perhaps they're all just waiting. Perhaps when we're all dead
Advertisement:
Out they'll come a-slithering, from underneath the bed!"
—The Doctor

The one with a young one. Seriously.

The Doctor has a theory — what if some creature, way out there in the starless dark, had evolved itself into the perfect hider? There are perfect hunters, after all, and creatures with a perfect defense. If that creature existed, how would you know it was there? Maybe it follows you around, constantly; but what would it want? And what does it have to do with that nightmare, that one nightmare everyone has, where you wake up in the night and there's something lurking underneath your bed...

Clara has a date, and it's not going well. She's finally managed to get Danny Pink out for some drinks, but an inadvertent comment triggers his war guilt, there's an argument, and, before you know it, she's stormed off. Perfect time for an adventure, then! The Doctor agrees, and, after propositioning her in her bedroom (not like that), they're off on another trip. The destination? Well, through the power of the TARDIS' telepathic controls and Clara's subconscious, the source of the nightmare that's been haunting the human race since time immemorial.

So begins a journey, and a lot more questions. What's that hiding under everyone's bed? What's that knocking at the end of the universe? What's that thing that the Doctor's afraid of? What's that pricking on the back of your neck?

"Fear makes companions of us all."