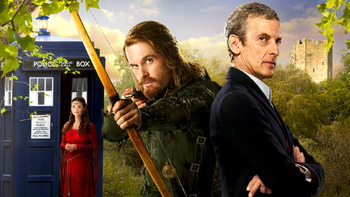 Two thieves and a maiden. One stole a TARDIS, the other stole gold, the last... stole much attention with that stunning red gown.
Click here to see the Radio Times magazine poster for this episode: 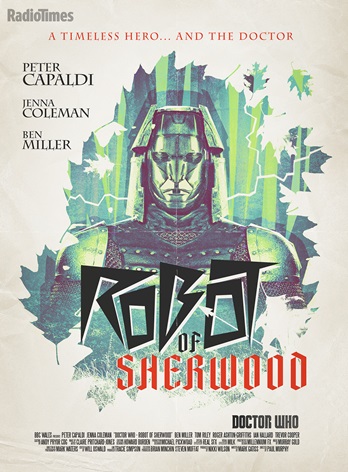 A.K.A. Robin Hood II: Men in Metal Tights.
The Doctor: Old-fashioned heroes only exist in old-fashioned storybooks, Clara.
Clara: What about you?
The Doctor: Me?
Clara: Yeah. You. You stop bad things happening every minute of every day. That sounds pretty heroic to me.
The Doctor: [modestly] Just passing the time.
Advertisement:

The one where the Doctor engages in a Cock Fight with Robin Hood.

And Clara meets her idol. Then the Doctor keeps trying to one-up him, and she has to deal with the dick measuring contest. The one that Rory was spared.

More dubiously known as the one that had a scene taken out at the eleventh hour because it hit too close to home.

When given the choice to go anywhere in time and space, Clara eagerly requests that they go to meet Robin Hood. Exasperated, the Doctor complies with her request and pilots the TARDIS to Sherwood Forest, 1190(ish)AD, all the while insisting that Robin Hood was nothing more than a made-up legend who never existed outside of over-dramatised storybooks. This makes it a bit surprising for him when, immediately upon stepping out of the TARDIS, the Doctor is confronted by a charming rogue in Lincoln green armed with a bow-and-arrow who identifies himself as none other than... Robin Hood.

While Clara is thrilled to bits at meeting her childhood hero and his merry band of heroic thieves, the Doctor immediately smells a rat and begins to investigate just who, or what, this so-called Robin Hood actually is. His investigations take him to a nearby castle where the villainous Sheriff of Nottingham, assisted by an army of sinister knights, is kidnapping the local peasantry and forcing them into slavery while stealing what little gold they have, yet leaving any other valuables alone. The Doctor, Clara and Robin find themselves captured, imprisoned, and forced to defeat the Sheriff's evil scheme and bring justice back to Nottingham — something which would be a lot easier if the Doctor and Robin could stop bickering for longer than two minutes...