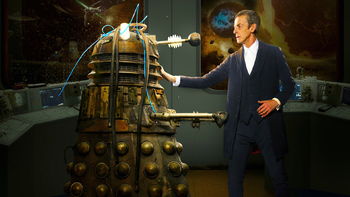 A "good" man versus a "good" Dalek.
Click here to see the Radio Times magazine poster for this episode: 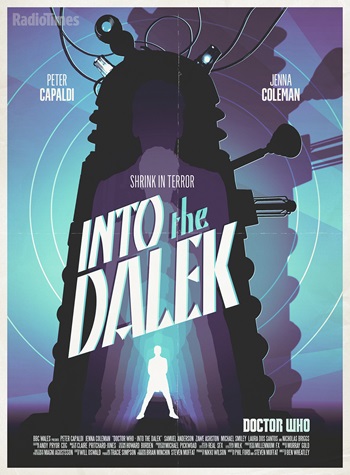 The Retraux Sixties style of this poster is a homage to Fantastic Voyage.
"A Dalek so damaged its turned good. Morality as malfunction. How do I resist?"
— The Doctor
Advertisement:

The one without lasagna.

What's Pink and Blue and angst-ridden all over? This episode.

Co-written by Phil Ford and Steven Moffat, "Into the Dalek" marks the Twelfth Doctor's first encounter with the Daleks.

Journey Blue's having quite the bad day — and, yes, that may be an understatement — her brother's dead, and her ship's fleeing through an asteroid belt with a Dalek cruiser in hot pursuit. Luckily, as her own ship explodes another instantly materalises around her — it's the TARDIS, with the Doctor at the console, doing what he does best: interfering! He takes her back to the Aristotle, a battleship clinging to the back of an asteroid staffed by rebels against the Daleks' many regimes. They're none too impressed with the intruder, but the Doctor manages to talk himself down from being shot dead with a little help from Journey. Besides, he's a doctor, and the rebels have a patient for him...

It's a Dalek! And a good one at that — broken enough to have developed a conscience, and to reject the Dalek way of life entirely. Apart from that, though, it appears to be physically sick. The Doctor thinks he can help, but first he has to dash back to Coal Hill School and grab Clara. She's having a rather better day, having met dashing ex-soldier and now-teacher Danny Pink, but the Doctor has a job for her. (And coffee, finally).

The Doctor, Clara, Journey and a small platoon of soldiers are shrunk down to minuscule size, and carefully placed inside the belly of the beast. The Doctor'll have to face dangerous machinery, killer antibodies and his own increasingly-murky morality, but if he gets it right, he could change the Daleks forever...

"You asked me if you were a good man. And the answer is, I don't know. But I think you try to be. And I think that's probably the point."