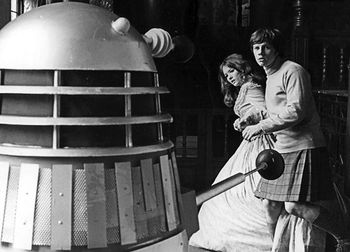 A still of what must certainly be the last Dalek story.
Jamie: Anyone would think that this is a little game.
The Doctor: No, it is not a game.
Jamie: Of course it isn't, Doctor. People have died. The Daleks are all over the place, fit to murder the lot of us, and all you can say is that you've had a good night's work!
The Doctor: Jamie...
Jamie: No, Doctor! Look, I'm telling you this, you and me, we're finished. You're just too callous for me. Anything goes by the board, anything at all.
Advertisement:
The Doctor: I care about life. I care about human beings. Do you think I let you go through that Dalek test lightly?
Jamie: I don't know. Did you? Look Doctor, just whose side are you on?

The one where the Daleks say goodbye... for now.

Written by David Whitaker. This seven-episode serial first aired from May 20 to July 1, 1967.

At the end of the previous story, the TARDIS was nowhere to be found - turns out it's been stolen by Edward Waterfield, a Victorian antique dealer who has been sent forward in time by the Daleks to capture the Doctor and Jamie.

The Daleks are trying to understand the "Human Factor"— the special quality humans possess that has enabled them to defeat the Daleks so often. Jamie is forced to complete a test— the rescue of Waterfield's daughter Victoria - while being monitored by the Doctor. With the "Human Factor" isolated, the Doctor implants it into three Daleks, who become amiable and playful.

Everyone is suddenly whisked off to Skaro where it turns out that actually the Daleks are trying to isolate the "Dalek Factor"— the impulse to kill and destroy— and implant it into humans, with the TARDIS being used to spread this throughout time and space. The Doctor implants more Daleks with the Human Factor and a civil war breaks out as the Doctor, Jamie and Victoria escape. With her father dead, Victoria comes along aboard the TARDIS as the Doctor watches the destruction of the Dalek city and muses that this must surely be their final end. Yeah, about that...

Note that this is probably the only time the show really meant it when they said the Daleks were destroyed; this was intended to be the final Dalek story ever in Doctor Who, as their creator was busy trying to sell a Dalek series to America. It didn't take, but it was still five years before they returned to the show. Thus this is probably the closest we'll ever get to a "last Dalek story."

Notably, this serial was one of only three from the show's monochrome era to be re-ran during the Classic Series' lifetime,note The other two were "An Unearthly Child" and "The Krotons", which were both repeated on BBC Two in 1981 as part of the "The Five Faces of Doctor Who" repeat season; barring the unscheduled repeat of part 1 of "Unearthly" the week after it went out, the "Evil" repeat was the only example ever of a black-and-white story being seen again on BBC One after its original transmission and under some particularly unique circumstances: at the end of the next season's finale, "The Wheel in Space", the Doctor shows Zoe an excerpt from this serial to explain to her the kinds of dangers she'd face when travelling with him. While "The Wheel in Space" only showed the cliffhanger of Episode One for the sake of runtime, its original broadcast was directly followed by a complete re-airing of this story, with in-character narration

from Patrick Troughton and Wendy Padbury establishing that the re-run is meant to be what the Doctor actually showed Zoe. Due to the likelihood at the time that it was going to be the last Dalek story ever, and their creator Terry Nation had already withdrawn permission for the BBC to exploit the Daleks, the repeat happened as a final opportunity for them to be seen onscreen.

Only the second episode remains, but the missing episodes were released in animated form in September 2021.