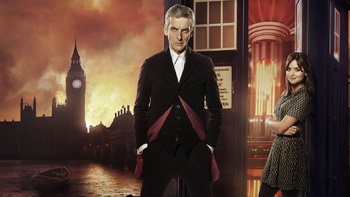 The clock has struck Twelve.
Click here to see the Radio Times magazine poster for this episode: 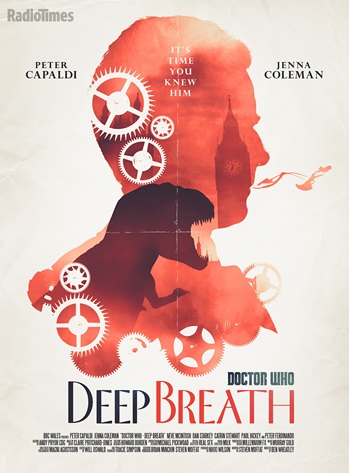 Thank Billy Hanshaw for influencing artist Stuart Manning's creative direction on this poster.
"How long can you hold your breath?"
— The Doctor
Advertisement:

The one where the Doctor calls a dinosaur sexy. It Makes Sense in Context.

Written by Steven Moffat. The first episode of Series 8 and the first episode to fully feature the Twelfth Doctor. Touting a feature-length run time of 76 minutes, this premiere is the most likely reason why Series 8 has only 12 episodes as opposed to the traditional 13, almost taking up the time of two normal-length episodes. It also featured the return of the Clockwork Droids, first seen in "The Girl in the Fireplace" (albeit in a somewhat different form).

In Victorian London, a Tyrannosaurus rex has surprisingly appeared in the Thames outside the Houses of Parliament, prompting the arrival of Madame Vastra and the Paternoster Gang to investigate how it got there. When it vomits up the TARDIS, which in turn reveals the newly regenerated Twelfth Doctor and Clara (last seen in the TARDIS as it was crashing), that particular mystery seems to be solved — but when the dinosaur spontaneously combusts later that night, our heroes realise that something more complicated is at work. The incredibly disoriented Doctor launches himself into an investigation of who or what is going around incinerating people (and dinosaurs), and for what sinister purposes, while Clara tries to adjust to the new man that her friend has become and to decide whether or not she can continue to trust him.

This episode marks the first use of a new title sequence

based on this fan-made intro

and liked it so well, he hired Hanshaw to do an even more dolled up version of his original concept, and Billy signed on for other projects for the BBC.

An unusual aspect of the first part of Series 8 is that the episodes were filmed in broadcast order. Not only that, but Capaldi's first scene in "Deep Breath" was also his first-ever proper scene filmed as the Doctor. This gave viewers the unusual perspective of being able to watch the actor develop the new Doctor, and Capaldi and Jenna Coleman develop the new Doctor and Clara's relationship, in very close to real time.