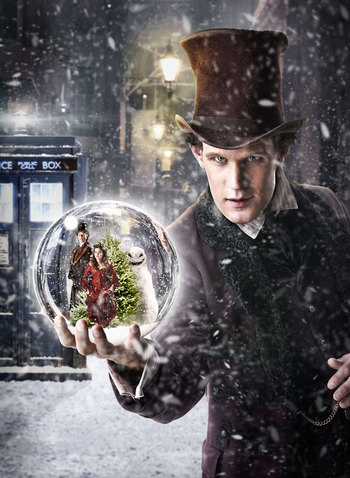 "Talking snow... I love new things."
"It will build an army of ice... and it will be the last day of humanity on this planet."
— The Doctor
Advertisement:

The one with the impossible girl and the voice of Gandalf as a snowglobe.

Also, the Doctor changed the desktop of his TARDIS from whimsical wonderland to Spartan and sterile. Guess he put away his childish things. And learned his lesson about having glass floors.

Written by Steven Moffat. The 2012 Doctor Who Christmas Episode.

It's Christmas Eve 1892, and the falling snow is the stuff of fairy tales. When the fairy tale becomes a nightmare and snow turns out to have really sharp teeth this year, Madame Vastra, her wife Jenny Flint and their Sontaran friend Strax (who has by now been revived) call on the Doctor for help. But the Doctor is in mourning for the Ponds, reclusive and determined not to engage in the problems of the universe. He's parked his TARDIS high above the clouds and refuses to get emotionally invested in Earth issues again.

Madame Vastra, Jenny and Strax investigate the snow, knowing full well that the Doctor's mourning is just a phase and that they need just the right kind of trigger to get him going again. This trigger turns out to be a young barmaid-slash-governess named Clara (Jenna Coleman). Her employer's previous governess drowned rather nastily in the garden, and stayed frozen for days before anyone was able to thaw her out. This, as it turns out, enabled the sentient snow (actually a telepathic alien parasite, voiced by Sir Ian McKellen) to get a blueprint of the human genome, and it's about to use that blueprint, powered by the energy of the young daughter's resulting nightmares about the governess, to take over the world. Helping the snow are brainwashed Victorian scientist Doctor Simeon (Richard E. Grant, who has incidentally played the Doctor a couple of times before) and his beautiful Steampunk lab.

When Clara mentions the word "pond" (as in what the governess died in), it sparks the Doctor into visiting Simeon's lab, pretending to be Sherlock Holmes. He realises that the snowy menace might actually threaten to destroy the Earth. After rescuing Clara and the children from the now-revived and very icy ex-governess, he takes Clara up to his TARDIS, decides to start taking on companions again, hands her a TARDIS key — and watches in horror as she's dragged out by the ice-governess and promptly falls several hundred feet to her death. Strax manages to keep her alive, but just barely, and the Doctor rushes to confront Simeon a second time and destroy the sentient snow once and for all. However, when the Doctor uses the memory worm to wipe Simeon's mind and break the "link", the snow reveals it has already become its own entity, and animates Simeon's now empty body to try and kill the Doctor. But Clara, knowing that the parasite is telepathic and can be destroyed by a thought, spends her last moments wishing it to die. As it turns out, Clara's mind is able to destroy its immense power merely by thinking... and the tears of the children she cared for make the snow melt once and for all.

At the funeral, the Doctor finally realises that Clara's familiar voice wasn't just a coincidence, and neither was her mentioning soufflés. Her name was Clara Oswin Oswald. He also realizes that Simeon was working for something very familiar: the Great Intelligence, who picked up a thing or two from this encounter about the strategic weaknesses of the London Underground, and will eventually go on to bother the Second Doctor with that knowledge.