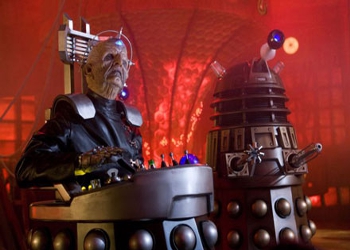 Davros is back, and he's been to the Dr. Claw Emporium since his accident with Bostock back on Necros.
"I just want you to know there are worlds out there, safe in the sky because of her. That there are people living in the light, and singing songs of Donna Noble, a thousand million light years away. They will never forget her, while she can never remember. And for one moment, one shining moment... she was the most important woman in the whole wide universe."
— The Doctor, saying one of the most heartbreaking goodbyes he has ever had to give to a companion.
Advertisement:

The one with the return of an overcookednote Okay, that was in poor taste... ham among Who villains, the birth of Handy, and the one where Rose finally gets her happy ending. But Donna doesn't. And neither does the Doctor. Nor does her family.

When we last left our heroes, things looked grim. Sarah Jane was about to get gunned down in her car, Gwen and Ianto's More Dakka was not going to cut it and the Doctor was regenerating. Now we're picking up where he left off. Torchwood gets protected by a nifty program Tosh designed, Mickey and Jackie materialise with their BFGs just in time to save Sarah Jane, and Ten regenerates... back into Ten. This display of "vanity issues" will prove to be a slight problem a ways down the line.

Anyway, Ten is still Ten. Wait, what? Apparently, since the Doctor's hand-in-a-jar is kept in the control room, he could use it to heal without changing. He simply directed the excess energy into the hand, instead of into a whole new body. Everyone is relieved that Ten is still Ten (especially Rose, since she came so far and all).

The Daleks surround the TARDIS, suck out its power and take them to the Crucible, the Daleks' base ship. Sarah Jane, Mickey and Jackie decide to go along, and some helpful Daleks take them there too.

The Doctor, Jack, Rose and Donna are surrounded by Daleks in the Crucible and step out of the TARDIS to face them. Donna is distracted by the sound of a heartbeat and gets stuck inside the TARDIS. The Daleks open up a trap door and the TARDIS gets flushed into the core of the Crucible. Donna is trapped in the burning TARDIS. She looks over at the hand and reaches out to touch it. The jar bursts, and the hand is enveloped in a golden light that seems to be forming... a new body! It's the Doctor!

The Doctor Clone dematerialises the TARDIS just in time, but everyone else thinks it has been destroyed. Jack lets himself get killed by a Dalek and plays possum, hoping to infiltrate the base. The Daleks take the Doctor and Rose to Davros and sweep Jack into the trash.

Back on the TARDIS, the Doctor Clone finds some clothes (specifically, the blue outfit), and tries to explain himself to Donna.

Donna: You. Are. Bonkers! Is that what Time Lords do? Lop a bit off, and grow another one? You're like worms!

Apparently, when Donna touched Handy, there was a "instantaneous biological metacrisis" and the Doctor Clone grew out of Donna. As a result, he talks a bit like her too.

More than that, New Ten has only got one heart. ("Oh, that's disgusting.") Apparently, he's part Time Lord, part human. He explains to Donna how special she is for being part of him now and she's finally starting to believe it a little.

Back on the Crucible, Davros gives the Doctor a briefing on their plan. Apparently all the 27 planets combined form a "reality bomb" that can dissolve every form of matter. Davros gets really excited and chews on every available piece of scenery. But the Doctor realises that Davros isn't remotely in charge of his creatures anymore. He was taken out of the Time War by Dalek Caan, who stared into Time itself, neatly mirroring the way Rose saved the Doctor from the Daleks once. However, Dalek Caan didn't have a Time Lord around to take Time itself away again, and he went completely mad in the process. Davros is now little more than the Daleks' "pet": a source of DNA cells to rebuild the Dalek race, and locked in the basement by his own offspring. Anyway, Davros explains that the 27 stolen planets form a compression field which can be released as a wave with the power to cancel out the electrical energy of atoms, reducing all matter into dust and then turning the dust into atoms and the atoms into nothing. The resulting "reality bomb" has the potential to keep travelling forever across all universes and even creep its way into parallel universes, destroying all life and matter in existence, until only the Daleks remain.

The Doctor's friends haven't given up yet. Jack, Sarah Jane, Mickey and Jackie will use Sarah Jane's Veran necklace (which contains a crystallised nova explosion) to blow up the Crucible (including themselves) if Davros doesn't stop. Similarly, Martha Jones will use the Osterhagen key to activate a doomsday device that will blow up the Earth (including herself) and put everyone out of their misery and leaving Davros stuck with just 26 planets: not enough to power up his reality bomb. Unfortunately, these threats work well with Davros's "The Reason You Suck" Speech, as Davros accuses the Doctor of being a Technical Pacifist while turning his friends into tools of violence. The Doctor remembers all the people who died to save his life during the New Series. Regardless of all that, the Doctor's friends' plans come to naught, as they are immediately zapped to the Vault by the Daleks.

Suddenly, the TARDIS materialises and the Doctor Clone runs forward with their new Dalek-killing gun. Then Davros, in true Emperor fashion, shoots lightning out of his hand, and zaps the Doctor Clone and Donna. The reality bomb goes into its final countdown and...

Donna stopped it! Even though she used to not even be able to change a plug, Davros's lightning triggered the other half of the metacrisis: when she activated the energy in the hand, part of her became filled with Time Lord essence. Now in possession of an active Time Lord mind, she's able to come up with Dalek-disabling solutions lightning fast with a huge surge of techno-babble. So that's what the Ood were talking about!

Doctor-Donna: Did I ever tell you, best temp in Chiswick? A hundred words a minute!

Held at gunpoint by Mickey, a completely astounded Davros demands to know why Dalek Caan didn't foresee this. To his horror, the Doctor and Caan reveal he did, given that someone has been manipulating events to bring him and Donna together; Caan admits it, but insists he only ensured what was meant to happen did. A furious Davros angrily accuses Caan of betraying the Daleks; Caan retorts he saw the Daleks for the monsters they are and moved to stop them once and for all. As they get into the TARDIS, the Doctor Clone decides that even without their reality bomb, the Dalek empire is still a monstrous threat against the universe, so he tampers with the Crucible's control's panel to unleash a lethal energy feedback that blows up all the Daleks, to the utter horror of the original Doctor, who really doesn't like to be reminded of what he did in the Time War. The Doctor offers Davros a chance to be saved, but Davros chooses to stay behind and die (though it doesn't last) on the exploding Crucible, bitterly cursing the Doctor and naming him "The destroyer of worlds!"

All the planets are sent home, but Earth just doesn't make it before the teleportation device gets blasted by the Supreme Dalek. So, they decide to turn the TARDIS into an Earth tow boat. In Cardiff, Torchwood Three uses the Cardiff Rift to provide massive amounts of energy. The Doctor properly introduces himself to Ianto and Gwen through their video connection, and he and Rose are happy to see that Gwyneth has a 21st century relative. In Ealing, K9 and Luke provide the supercomputer Mr. Smith with all the TARDIS data needed to get the Earth back home. Everyone gathers around the TARDIS core to help fly the Earth back home. (All except Jackie, who isn't allowed near the controls.) Everyone hugs everyone. Donna especially hugs Jack a lot.

Sarah Jane heads back home to Luke. The Doctor deactivates Jack's vortex manipulator again. ("I told you: no teleport.") Martha promises to destroy the Ostenhagen key and walks off with Jack (whose story continues in Torchwood, "Day One"). Mickey realises that he's finally done following Rose around and... starts following Martha around. The TARDIS heads back to alternate dimension Norway to drop off Rose and Jackie.

Rose doesn't want to leave the Doctor, but the Doctor offers her a nice consolation prize of the Doctor Clone, because the Doctor feels that this version of himself is a bit too genocide-happy (much like he himself used to be) and needs a Rose in his life to cure that. The Doctor Clone is also part human, able to age, and willing to spend his life with Rose from now on. This doesn't sit quite right with Rose yet, so she begs the two Doctors to finally tell her what he wanted to say to her last time, after she said "I love you" to him. The Doctor still Cannot Spit It Out.note Rose: 0. Little shops: 3. The Doctor Clone whispers it into her ear, and although we can't hear it, she's happy enough and responds by snogging him.

In the TARDIS, Doctor-Donna is starting to exhibit some problems, as her behaviour becomes hyperactive, and she literally can't stop talking or focus on a single matter. This leads to the most Sadistic Choice the Doctor's ever had to make. Donna's Time Lord brain is overloading her human body, which, as the Doctor solemnly explains, is the reason why there never has been a human/Time Lord fusion before. Either her head asplode, or the Doctor wipes her memories of everything she's done with him going back to her first appearance. The Doctor knows there's only one option to save Donna's life. She begs and pleads, but the Doctor takes her into his arms and gently wipes her memories. She can never remember who she was, or anything about the Doctor, or she'll burn up. She goes back to the way she used to be, and she can never know about how much she saved the universe or how amazing she was. The Doctor takes her home, where she turns into her old self... her old old self, loud and crass... And someone's going to have to tell her that she's missed two full years, and that her fiancée and her father are dead, that is, if the memory-wiping was thorough enough to blank out that much. The Doctor tells Donna's mother to be nice to her for a change, bids Wilf farewell and steps out of their lives. (For now.)invoked

The Doctor goes off, once again on his own. He takes off his suit jacket, soaked to the brim in rain... just like his morale.

"But every night, Doctor, when it gets dark, and the stars come out, I'll look up on her behalf. I'll look up at the sky and think of you."
— Wilfred Mott, trying to comfort the Doctor.
Feedback

Davros gives a speech that shows how evil he is.

Davros gives a speech that shows how evil he is.