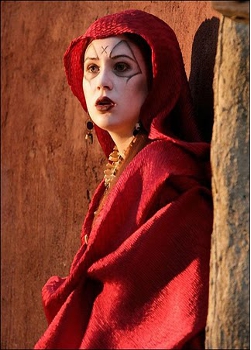 And we thought Rory was the only one who had mostly unseen adventures in the Roman Empire!
"I don't know. Isn't that brilliant? I love not knowing! Keeps me on me toes. It must be awful being a prophet, waking up every morning, 'Is it raining? Yes, it is. I said so.' Takes all the fun out of life."
— The Doctor
Advertisement:

The one where Peter Capaldi and Karen Gillan appear early.

Written by James Moran. This episode was inspired by the very similar Big Finish Doctor Who episode "The Fires of Vulcan".

The Doctor and Donna land in Ancient Rome, ready to have more fun than an amphora of monkeys.

Except after some searching, they discover that they've landed in Pompeii, on Volcano Day, approximately 24 hours before Mount Vesuvius paves paradise and puts up the Roman equvalent of a parking lot. Donna immediately requests the Doctor's help to organize a mass evacuation and save everyone, but the Doctor shuts the idea down: as we've seen with the First Doctor, you can't change history, not one line.

So they go for the other secret Time Lord manoeuvre: running away, much to Donna's frustration. Unfortunately, the TARDIS is missing; while they were walking around, a street merchant seized it (justified; it was parked on his market patch) and sold it to Caecilius, a local marble merchant (played by Peter Capaldi) with a dysfunctional family (a hungover son and an oracle daughter) AND a taste for avant-garde art. It's not the first time the TARDIS has been mistaken for an art installation.

In no particular order: Caecilius' villa is later attacked by a massive magma-man (which is stopped by a bucket of water), and it is revealed that the volcano fumes inhaled by his oracle daughter to boost her visions are slowly turning her into stone. Also, a local prophet claims that there's something on Donna's back. This will be important later. And he says that a planet has apparently gone missing. This will be very important later. Meanwhile, Caecilius has a freaking computer circuit made of stone, so the Doctor decides to stick around a bit longer for the above events.

The Doctor confronts the oracles of the Sybilline Sisterhood (with a Walther P38 water pistol) and finds out why someone ordered a load of marble power-converters.

To his horror, the Doctor finds out that Mount Vesuvius won't erupt if he just leaves; he needs to make it erupt. If Pompeii isn't destroyed, then since the alien menace of the week hasn't also been destroyed, a race of lava golems will turn humans into more golems, boil the ocean and conquer the world. Donna realises for the first time that travelling with the Doctor can be very morally disturbing. They make the volcano erupt, both fully expecting to die, but it turns out the conversion device they used was inside an escape pod. Donna convinces the Doctor to go back and save Caecilius and his family. Because not everyone is an über-depressed near-suicidal Time Lord, and sometimes the Doctor forgets that. However, he also forgets that changing history has consequences, and long down the line will these consequences take a toll on his hearts, his psyche, his very soul, and nearly creation itself...

Six months later, Caecilius and his family have their lives back on track, the daughter is finally socialising like a (in our time, anyway) normal teenager, and that wastrel son is making good of himself, studying to be a doctor (not that kind). And their new household gods on the altar, with a box flanked by this man and this woman, look suspiciously familiar...

The casting for this episode turned out to be quite auspicious. Phil Davis (Lucius) would play the first antagonist in Sherlock (a series run by the same showrunners as Doctor Who); Tracey Childs (Metella) had previously appeared as Dr. Elizabeth Klein in Big Finish Doctor Who, who would go on to become a regular Big Finish companion; Karen Gillan (Soothsayer scout) would return as Amy Pond, one of the two longest-serving companions of the new series; and Peter Capaldi (Caecilius) would have a supporting role in Torchwood: Children of Earth and later take the helm of the show as the Twelfth Doctor himself.note The Twelfth Doctor episode "The Girl Who Died" featured a Call-Back to this episode, with the Doctor realizing that he deliberately chose Caecilius' face subconsciously as a reminder of one his proudest decisions, in the hope that he would be prompted to do more such actions.

Alternative Title(s): Doctor Who NSS 4 E 2 The Fires Of Pompeii