What Have We Ear? 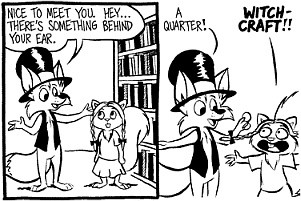 Stock trope of the Stage Magician, sometimes referred to as the Miser's Dream. On their introduction, something will get pulled out from behind someone's ear.

This is in fact a very easy trick to perform off-the-cuff. The only setup required is that the magician have a coin or other small object somewhere he can palm it.

For other stock tricks, see Saw a Woman in Half, Pick a Card, Pull a Rabbit out of My Hat, and Disappearing Box.