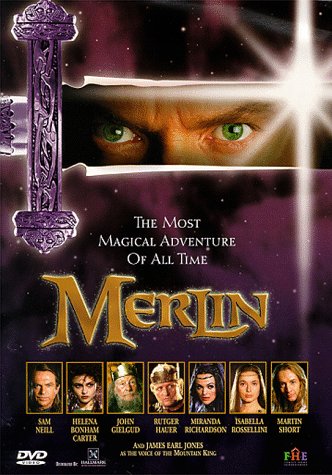 Merlin is a television miniseries released in 1998 that retells the legend of King Arthur from the perspective of the wizard Merlin, starring Sam Neill in the title role, Miranda Richardson as the antagonist Queen Mab, Martin Short as her henchman Frik, Isabella Rossellini as Nimue and Helena Bonham Carter as Morgan le Fay.
Advertisement:

The story covers not only the rise and fall of Camelot, but the phase in the legendary history in Britain that precedes it. Unlike the traditional version where he suffers from Mentor Occupational Hazard, Merlin stays active throughout the entire reign of King Arthur, with some details altered to fit the story more from his point of view.

The series is also influenced by other Celtic/European legends and folklore. It introduces Queen Mab, a fairy first attested in Romeo and Juliet, as the leader of The Fair Folk and the Big Bad of the Arthurian legend who manipulates traditional villains Morgan le Fay and Mordred. Other magical creatures like gnomes, griffins and even a talking mountain appear.

The series was followed by a novelization in the form of a trilogy in 1999. In 2006 it received a sequel, Merlin's Apprentice, which had less to do with traditional Arthurian legend, had some Continuity Snarls and was not as popular as the first movie.

Not related to the 2008 series of the same name, besides the source material.