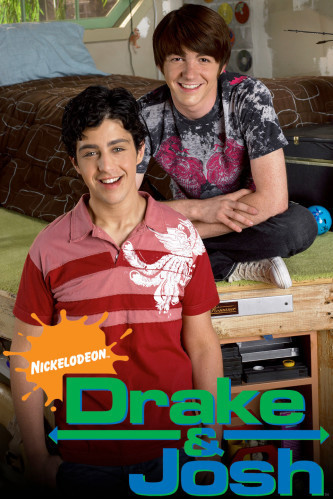 Josh Nichols: I don't know Drake, all this cheating makes me feel... dirty.
Drake Parker: Well, take a bath when you get home.
Well I never thought that it'd be so simple, but...
I found a way, I found a wa-ay
If you open up your mind...
See what's inside!
It's gonna take some time to realign
But if you look inside, I'm sure you'll find
Over your shoulder, you know that I told you
I'll always be pickin' you up when you're down!
So just turn around!
— " I Found a Way", sung by Drake Bell
Advertisement:

An over-the-top Nickelodeon sitcom created by Dan Schneider about two Odd Couple stepbrothers that ran from 2004 to 2007.

Drake Parker (Drake Bell) is a popular, conceited ladies' man and dim-witted musician who ends up getting a stepbrother in Josh Nichols (Josh Peck), a goofy, affectionate, unpopular geek (until Josh Peck lost the weight and became quite handsome

that is, although Josh Nichols was still a geek).

The two barely even knew each other before their parents got married, but ended up being fairly close and balancing each other out. Drake taught Josh how to not be so uptight and Josh tends to bring out a nicer side of Drake. Many episodes are about Drake getting Josh to do something a little outrageous and not be so stiff, and it usually involves a plan to make money or get a girl.

And then there's Drake's horrible sister, Megan (Miranda Cosgrove), who is several years younger and goes out of her way to torment the two whenever possible. She has no excuse for it, while their parents think she is an angel. The last season saw a reduction in her general mean-spiritedness (more harmless pranks than outright evil torture), but throughout the series, there is only one moment she shows genuine affection towards them.

The show is a Spin-Off of the sketch comedy series The Amanda Show, which Schneider had created and featured Drake Bell, Josh Peck, and Nancy Sullivan as cast members. Schneider was impressed with the chemistry Drake and Josh displayed during several of the show's sketches and decided to give them their show where they could play off their differing personalities.

Like its fellow TeenNick programs, the show is aimed at preteens and young teenagers, but notable for many jokes aimed at adults. Homages to many classic sitcoms, innuendo and camp are the order of the day in many episodes. If there's a sitcom trope, Drake and Josh have probably covered it.

The show had two TV movies, Go Hollywood (set during the series), which was later referenced in its "sequel" via the series' near-end special Really Big Shrimp. About 15 months after the series ended, Merry Christmas Drake and Josh was aired, set about 2 months following the events of Really Big Shrimp.

Drake Bell is an actual musician who wrote and sang the opening theme song.

The producers and several cast members (namely Schneider and Cosgrove) have gone on to make the show iCarly which is very much in the same vein of comedy.

Despite being the earliest part of the Nick Verse, it wasn't where it originated. Drake Bell helped, but it started in Zoey 101; Drake and Josh, meanwhile, exists as a Show Within a Show in the Nick Verse. Well, most of the time.note Side characters Gavin, Craig & Eric appear in the iCarly episode "iStart A Fanwar", while Helen appears in the Victorious episode "Helen Back Again". And while iCarly is later retconned into a fellow "show within a show", Victorious isn't, and both have had crossovers with each other...

The series chronicles Drake Parker's attempts to find Walter Nichols, who has gone missing. The series features several cast members from the show returning, although its canon status is unclear.

Josh stresses over telling Drake he's dating Drake's arch enemy Mindy, only to find out there was never any reason to hide it.

Josh stresses over telling Drake he's dating Drake's arch enemy Mindy, only to find out there was never any reason to hide it.