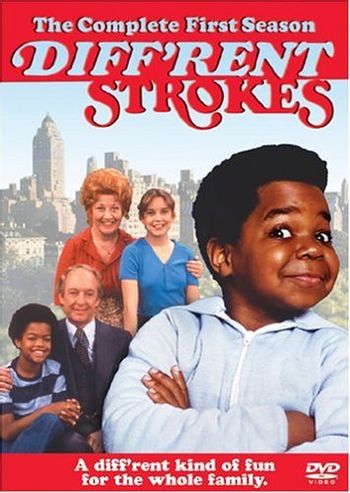 Diff'rent Strokes (1978–86) made a star of Gary Coleman as Arnold Jackson, the younger of the two boys. Todd Bridges was his older brother Willis and Conrad Bain was the proper white man, Phillip Drummond. As one of NBC's few late-'70s hits, it quickly launched a spinoff in The Facts of Life the following year. First Lady Nancy Reagan made a guest appearance in a Very Special Episode about drug abuse, and ABC's Webster was a Follow the Leader rival. Ironically, Diff'rent Strokes itself actually moved to ABC when it got canceled by NBC. The theme was co-written and performed by Alan Thicke.

Unfortunately, this show is best remembered now both for its special episodes and the unhappy fates

of its three child stars (Gary Coleman, Todd Bridges, and Dana Plato, who played Mr. Drummond's daughter). As of the current time, Todd Bridges is the last surviving original cast member of the show, (Danny Cooksey joined later, and has avoided the fates of his older co-stars), but it's such stories that the Former Child Star trope is built upon. Gary Coleman's is parodied in the musical Avenue Q.