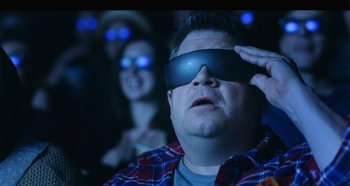 We're sorry troper, the web page you're searching for cannot be viewed in your reality. Please stand by for reconnection.

Dimension 404 is an anthology series streaming on Hulu, created by Dez Dolly and Will Campos, co-created by Dan Johnson and David Welch, produced by RocketJump and Lionsgate Television, and narrated by Mark Hamill. Each episode is a different story with a twist (like The Twilight Zone, The Outer Limits, and Black Mirror).

Tropes about the entire show:

"A finicky music blogger finally meets the girl of his dreams through the cutting-edge online dating site Make-A-Match, but their chemistry seems too good to be true."
Tropes related to Match Maker

"A snooty cinema purist struggles to convince his fellow film-goers that the 3D movie they're watching is summoning forth a brain-sucking interdimensional monster only he can see."
Tropes related to Cinethrax

"A hopelessly nostalgic physics student fights to prove her sanity when no one on Earth can remember her favorite 90's cartoon show."
Tropes related to Chronos

"A young arcade junkie attempts to master POLYBIUS, a sinister new game of unknown origin that induces nightmarish visions, but when kids start dying, he must beat the game to unlock its deadly secrets."
Tropes related to Polybius

"As a holiday threat looms large, an Army psychologist races against the clock to treat the strangest patient of her career - and the only one who can save Christmas - BOB, a depressed NSA supercomputer."
Tropes related to Bob

"A brash, up-and-coming pro FPS gamer finds the edge she needs in an energy drink that gives her real world "bullet time". It's a shortcut to fame and fortune-but it might just be a "shortcut" through the rest of her life."
Tropes related to Impulse