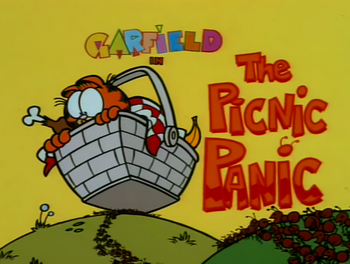 It is a nice summer day, a group of friends decide to go on a picnic, where they pack up a basket full of food consisting of sandwiches, cookies, lemonade, potato chips, pies, cakes, etc. and head out, usually to the outdoors, whether a garden, a park, countryside, or even into the wild.

When they get their picnic all set up, most of the time, you can expect them to face setbacks such as ants that want to steal the food or bad weather in the midst of it. In the case of the latter, they might have to plan their picnic indoors, to which one of the characters will complain that they can't do anything fun indoors, and the other characters will have to show them the fun things that can be done indoors.