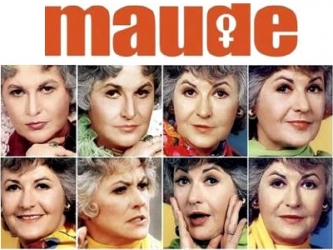 A spin-off of the hit sitcom All in the Family, created by Norman Lear and airing on CBS from 1972–78.

The title character, Maude Chadbourne-Hillard-Findlay (Bea Arthur), was originally written as Archie Bunker's Foil—female, suburban, affluent, educated, liberal, new age, free-thinking—and yet every bit as opinionated and pushy. Though the show was overtly political, it didn't suffer from the problems with strawmen that plagues so many other "hot button" shows. While Maude's political views were usually cast in a positive light—helping the needy, racial sensitivity, women's liberation—the character's greatest in-universe handicap was her personality: she was too forceful, stubborn, ego-driven, and often out of touch with the very issues she claimed expertise of. Thus the show wasn't so much a Take That! at left-wing beliefs the way All in the Family was for Archie's stubborn traditionalism, so much as it was a character-driven sitcom that simply had politics at its surface.

The show featured one of the first (positive) portrayals of abortion in TV history, when Maude realizes she's pregnant by her husband but makes the decision that she's just too old to have a baby. Her family supports her and she comes out of the situation (for the most part) better for it. Keep in mind this episode premiered just two months before the Roe v. Wade decision made abortion legal nationwide.

Lasted for six years in no small part due to good writing and Bea Arthur. Just Bea Arthur.

Not to be confused with Harold and Maude.