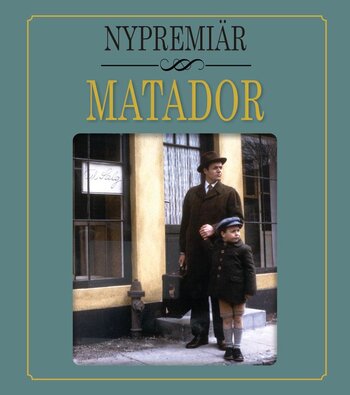 Matador is a classic Danish television series produced by Nordisk Film for Danmarks Radio in 1978-81. It was directed by Erik Balling (of Olsen-banden fame) with a manuscript by a team of writers headed by the popular novel author Lise Nørgaard.

In 1929 the young textiles representative Mads Andersen-Skjern, along with his son, Daniel, arrives in Korsbæk, a small, sleepy Zealandic town, dominated by a few old business families, headed by Hans Christian Varnæs, owner and manager of Korsbæk Bank. Mads is rudely snubbed by Arnesen, the incompetent owner of the town's draper's shop and decides to stay and go into business for himself, with a resolve that is only hardened when he is refused a loan by Varnæs, who is a personal friend of Arnesen. Mads also befriends the good-hearted pig-dealer Oluf Larsen, who, though wealthy, is too uncouth to be part of the city's society, and his daughter, Ingeborg, who Mads eventually marries. Over the years, Mads manages to put Arnesen out of business, form an empire of clothing stores, factories and banks, and finally be accepted by the established society.

Around the central conflict between the established society around Varnæs and the ambitious newcomer, Skjern, the life of the town unfolds, and everybody has to come to term with the changing times in both their small society and Denmark at large.

The series was panned by the critics when it was first appeared on Danish National Television, but became an instant success with the viewers. It has since achieved near-mythological status in Denmark and it is said that you will never understand Denmark and the Danes until you have seen Matador. And as of 2015 you can even visit a real-life Korsbæk amusement park north of Copenhagen complete with actors playing the original roles in the recreated decorations

The series has nothing to do with Toros y Flamenco — in Denmark a matador is a business magnate. Matador is also the name of the Danish board game that Monopoly, is based of, which we see the Varnæses play with their friends in one episode.

Oh, and a "Graa Atlaskes" is a shiny grey party dress.