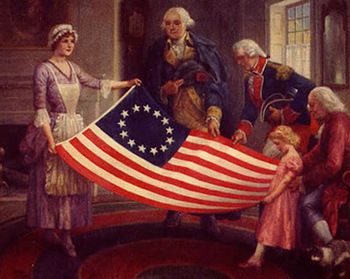 By George, it's perfect!
Advertisement:

Elizabeth "Betsy" Griscom Ross (January 1, 1752 – January 30, 1836) was a seamstress who is traditionally credited with sewing the first American flag. For this reason, the original 13-star U.S. flag is often called, "the Betsy Ross flag."

The popular story goes that one day in 1776, George Washington showed up at her shop in Philadelphia and ordered a flag. In some versions, he already had a design, but she made the suggestion of changing the six-pointed stars into five-pointed stars for ease of mass production. In other more fanciful versions, she designed the flag entirely on her own. But either way, she eventually presented the grateful Washington with a new flag for the new nation.

Historians typically dismiss this story as folklore. To be clear, Betsy Ross was a real person who lived during The American Revolution and did indeed sew flags for the Continental Army. Of course, many other women were engaged in similar work at the time, and the detail of who sewed the first American flag is almost certainly lost to history. The claim that it was Betsy Ross originated decades after her death, when it was promoted by her grandson, William J. Canby. This was around the time of the United States centennial in 1876, putting the American public in the mood for sentimental patriotic stories about the Revolution. Thus, she became a celebrated American heroine, often held up as a patriotic role model for young girls.