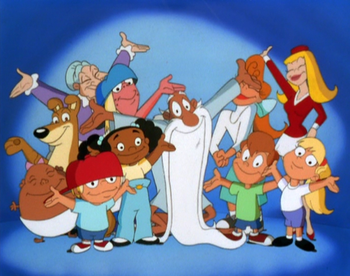 Father Time: The year, the present day. The place: TV Tropes. Histeria! was given an article made by dedicated fans of the show. Though we did not expect such a thing, it was nice of those people to do so.
Advertisement:

Warner Bros' Histeria! was one of several shows created in part as a result of the FCC deciding in 1996 to start enforcing the 1990 Children's Television Act that required a certain percentage of "informative" and "educational" programs; the creators of Tiny Toon Adventures and Animaniacs decided to react to this with a show centered on comedic sketches loosely based on historical events and topics, which premiered on Kids' WB! in September 1998.

One season (52 of the planned 65) of episodes were produced before the show was cancelled over budget concerns (i.e. being $10 million over it), then were repeated numerous times for the next three seasons before being taken off the network in 2001. Unlike its predecessors, Histeria! did not reappear in syndication on Cartoon Network or Nickelodeon. The show would've disappeared altogether if not for the fact that, in 2006, it reappeared as part of the initial lineup of Time Warner's In2TV channel until they were inexplicably removed in January 2009. After years of Keep Circulating the Tapes status, a MOD DVD set of the complete series was released in July 2016 on Amazon.com and Warner Bros.' online store. Tom Ruegger has expressed an interest in rebooting the show

Marks the final collaboration of Ruegger with composer Richard Stone, who died the year that the series ended.

Father Time: And so, we can now say "That's a wrap" on this article, so we'll see you all around on... Histeria! However, I have only one request: can we do a little more research before we get this page publicised?!
Loud Kiddington: SHEESH! WHATTA GROUCH!

While going down the river, Lewis is unable to understand Clark's instructions on which way to turn, resulting in them going over a waterfall.

While going down the river, Lewis is unable to understand Clark's instructions on which way to turn, resulting in them going over a waterfall.