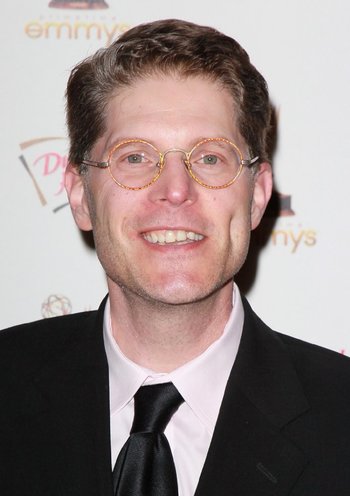 "You wrinkle your nose, you make it kinda nasal, and it's eh-buh-beh-eh boy. For the third sound you push it more. Eh-buh-BEH-eh-boy. Eh-ch-CH-eh-chair. Eh-d-D-eh-desk. And then you have to put together full sentences. The eh-beh-beh-boy sat in the eh-ch-ch-chair next to the eh-de-de-eh-desk. And nobody can do that, and that's why I have job security."
— Bob Bergen on performing

Robert Bergen (born March 8, 1964) is a prolific voice actor with several voice roles in western cartoons and a few in anime and video games. He has been the voice of Porky Pig, Tweety and other Looney Tunes characters, as well as voicing Lupin III in Streamline's dubs of The Castle of Cagliostro and The Mystery of Mamo , and Luke Skywalker in most of his non-film appearances (the Rogue Squadron series, Star Wars: Battlefront, Robot Chicken, etc.), he has also done creature sound effects in many feature films including Gremlins, Fright Night (1985), Army of Darkness, Dunston Checks In, and Total Recall (1990).

Bergen also has two connections to Game shows: he was a contestant on Wheel of Fortune in 1980, and the host of Jep!, a short-lived children's adaptation of Jeopardy! that aired on GSN in 1997.

Notable roles of Bob Bergen include