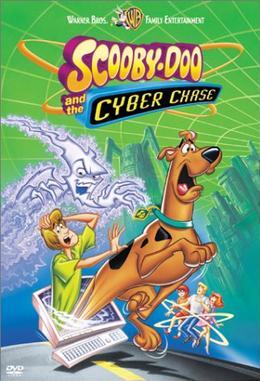 Yeah, they made a video game out of it.

My computer screen is my enemy...

The fourth installment in the series of Scooby-Doo Direct to Video films, Scooby-Doo and the Cyber Chase was produced by Warner Bros. Animation, yet still carries a Hanna-Barbera Cartoons, Inc. copyright and logo; it’s considered as the last official project of H-B, after the passing of founder and creator William Hanna resulted in H-B's absorption into WB Animation. It the last movie to be animated by Mook DLE, and using the character designs of the previous three movies. It was also the final time Scott Innes voiced both Scooby-Doo and Shaggy (though he sometimes returned afterword for commercials and video games), and the final time BJ Ward did the voice of Velma. However, it marked the first time Grey DeLisle voiced Daphne following the passing of Mary Kay Bergman. This was also the very first Scooby-Doo project produced entirely digitally, though Alien Invaders had a few digital sequences and effects.

Eric, a video game designer, has just created a new game based on none other than his friends Mystery Incorporated. However, one night, while he, his best friend and lab partner Bill, and his teacher, Professor Kaufman, are testing out a new laser they built to enter in the science fair, the laser beams a phantom virus from cyberspace into the real world. The virus breaks Eric's arm, but before it can do further harm, Professor Kaufman scares it away with a magnet lying nearby.

The next day, Mystery Inc. arrives at the college, and Eric tells them the story, and that the phantom virus is currently running around the campus causing mayhem. They agree to help their friend by splitting up and searching for the virus, each equipped with a special magnet that they hope they can use to destroy the virus with. Eventually, Shaggy and Scooby get tired of looking around, and take a break in the cafeteria. Of course, that's where the virus finds them at, and Scooby, Shaggy, and the virus have a classic Scooby-Doo chase with a remix of the original theme song in the background.

Fred, Daphne, and Velma, caught in the basement "snooping around" by Officer Wembley, are forced by Wembley to stay put with him in the lab until Professor Kaufman gets back. However, Scooby and Shaggy burst through the door with the virus on their tails. The gang runs aimlessly around the lab for about a minute, until they all collide in one location. Convenient for an unknown somebody, because right then, the laser is fired at the gang, and they're transported into cyberspace, and into the game Eric made based on their adventures.

Inside the game, there are ten levels:

In each level, there is a hidden box of Scooby Snacks that need to be obtained before you are automatically transported out of the level and into the next. Pretty neat, eh? In order to survive, the gang must make it through all ten levels. However, all throughout the game, the danger they face is real. And guess who decided to join them in the game?

Oh, and the film had a video game adaptation for original PlayStation and Game Boy Advance which sold well and became a "Greatest Hits" later on.

And no, this is not a Crossover between Scooby-Doo and Cyberchase.

This is a list of the following Tropes this movie provides examples of:

Scooby-Doo and the Cyber Chase

Scooby and Shaggy walk off once Fred suggests splitting up. When Fred says he didn't say who goes with who, Shaggy lampshades both the plan itself and the placement of which team members split up into what groups, indirectly on the latter.

Example of:
Let's Split Up, Gang!

Scooby-Doo and the Cyber Chase

Scooby and Shaggy walk off once Fred suggests splitting up. When Fred says he didn't say who goes with who, Shaggy lampshades both the plan itself and the placement of which team members split up into what groups, indirectly on the latter.