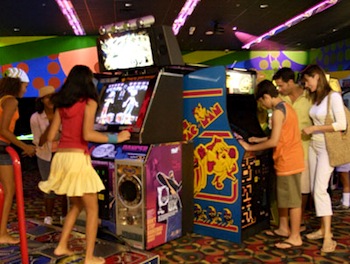 Not as common as they used to be, but they still exist in the West.note Left: Pump It Up; Right: Ms. Pac-Man
Advertisement:

A setting not seen as much these days due to their decline - thanks to home consoles and Internet cafés - this is where all the kids used to go to play their video games. Rows of them, in big, gloriously fashioned cabinets. Often in darkly lit rooms to let the video displays shine and maintained in states from squalid to pristine, the machines flash and burble to themselves even when not being played. More recent examples often feature DanceDanceRevolution-style fun.

Special mention must go to arcades as locations in video games.