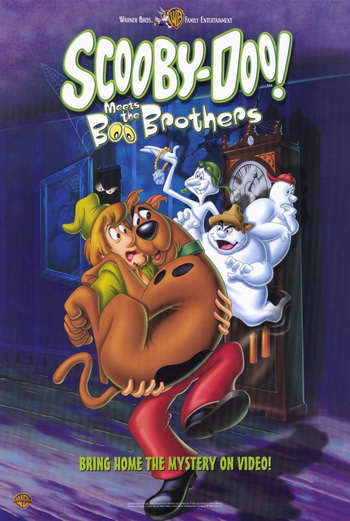 Scooby-Doo Meets the Boo Brothers is a television special produced in 1987 by Hanna-Barbera for the Superstars 10 series. Scooby-Doo, Shaggy and Scrappy-Doo head down south to the Beauregard Mansion. The owner of the plantation, Colonel Beauregard, has passed away and left everything to Shaggy. There, they learn that hidden somewhere on the property is a 'king's ransom' worth of treasures. However, like all old houses, the estate is haunted! Scrappy decides to hire some ghost exterminators. What our heroes get are the Boo Brothers: Straight Man Freako, wise-cracking Shrieko, and the aptly named Meeko.

If that wasn't enough, there are other perils on the treasure hunt: an escaped circus ape wandering around, hillbilly neighbors the Scroggins; overly affectionate Sadie Mae and her gun-totin' brother Billy Bob, debatably loyal butler Farquard, and Sheriff Rufus Buzby.

Scooby, Shaggy, and Scrappy have to all this to deal with and more as they track down the treasure, following clues left behind by the colonel.

This was the first of the three Superstars 10 movies to star Scooby, and rather conservative compared to its successors (Ghoul School and Reluctant Werewolf). The presence of real monsters is comparatively minimal, and the plot does contain several mysteries (complete with the classic "Scooby-Doo" Hoax), as opposed to the other two's emphasis on straight-up action and adventure.

The film is also notable for being the only animated Scooby film to not feature any voice work from franchise regular Frank Welker.

This Made-for-TV movie has examples of: