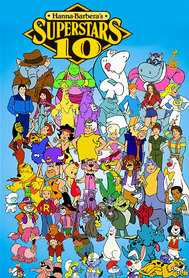 Hanna-Barbera Superstars 10 was a series of 10 made-for-TV animated films that were produced by Hanna-Barbera Productions and was apart of the Funtastic World of Hanna-Barbera programming block that ran from 1987-1988. Each TV movie featured some of Hanna-Barbera's most popular animated characters such as Yogi Bear, The Flintstones, The Jetsons, Scooby-Doo and Top Cat. The first 8 films had used traditional cel animation while the final two films used digital ink and paint.