Western Animation / The Greatest Adventure: Stories from the Bible 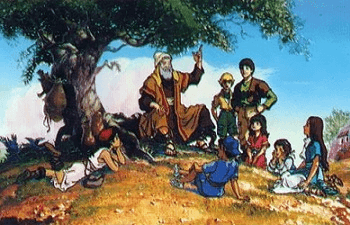 The main characters (in modern-day clothing) listening to the story of The Garden of Eden.
"While surveying the site of some ancient ruins, two young archaeologists, Derek and Margo, and their nomad friend Moki find themselves trapped and sinking in a whirling pool of sand. And when the dust settles, they stare up in awe at a vast chamber, filled with giant relics and artifacts from another civilization... And there, at the far end of the cavern, a door with a strange inscription - 'All who enter these portals pass through time!'"
— Opening Narration before each episode
Advertisement:

Developed by Hanna-Barbera from 1985 to 1993, The Greatest Adventure: Stories from the Bible was a 13-episode direct-to-video series that featured three young explorers, Derek, Margo, and Moki, traveling through time via unexplained Doorways of Time, which allow them to witness some of the major events recorded in The Bible. Often even within the same episode, they would stumble across one of the Doorways, allowing them to witness events from the same story that took place years later.

Similar to Superbook and Flying House, the series tried to focus on making the characters from the biblical stories relatable and believable. Surprisingly, it also adhered as closely to the original stories as possible, keeping many of the elements that most Moral Guardians quietly edit out to make the stories "appropriate" for children, editing only the relative closeness of events in order to keep within the 30-minute time frame.

The series was a personal effort from Joe Barbera, a lifelong and devout Catholic. Because of the close adherence, the series took the biblical stories very seriously; it was usually the side adventures of the time travelers that featured any comedy, although they often overlapped with the main story as the heroes tried to help the Biblical figures out in whatever way they could.

These cartoons are still often shown to kids in Sunday School.

It also shares an art style with Captain Planet and the Planeteers, as Ted Turner helped fund the project.

This video series provides examples of:

Example of:
Back from the Dead