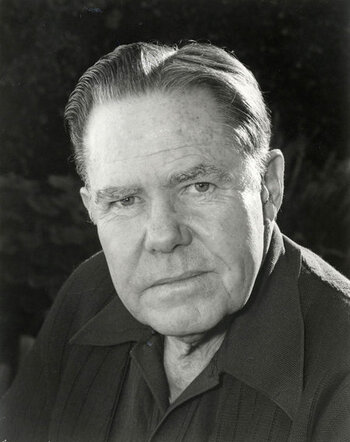 Charles Dawson "Daws" Butler (November 16, 1916 – May 18, 1988) was one of the most prolific—and beloved—voice actors from the early days of television animation.

Besides his work for Hanna-Barbera (where he was the TV equivalent of Mel Blanc), he did character voices during The Golden Age of Animation for Metro-Goldwyn-Mayer (you might recognize him as the voice of the Wolf in Red Hot Riding Hood and the many clones of it, like Swing Shift Cinderella and Little Rural Riding Hood), Jay Ward Productions, Warner Bros., Walter Lantz and De Patie Freleng Enterprises. Signature characters include Wally Gator, Yogi Bear, Huckleberry Hound, Snagglepuss, Quick Draw McGraw and Elroy Jetson. The earlier part of Butler's career found him working as an impressionist on radio, stage, and the last days of vaudeville, and included several collaborations with Stan Freberg (including handling puppeteering duties with him in Time for Beany, the live-action predecessor of Beany and Cecil, and featuring in and co-writing The Stan Freberg Show) and even being in the dub of Godzilla Raids Again.

In his later years, Butler trained many voice actors out of his home in Beverly Hills (which you can see some of here