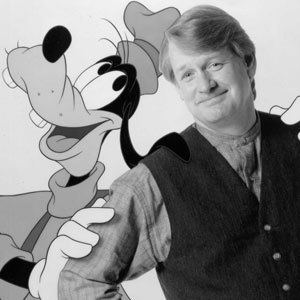 William Farmer (born November 14, 1952) is an American voice actor and comedian, best remembered for his roles as Disney characters Goofy and Pluto. Farmer has done all kinds of voices for other characters, in Western Animation and video games, including a few Looney Tunes characters. However, despite doing a lot of funny-voiced characters, Farmer takes voice acting seriously, emphasis on acting. This was taught to him by his mentor, the late Daws Butler. A Goofy Movie is a fine example of this, really giving Goofy a broad emotional range throughout the film.
Advertisement:

Farmer was always doing voices since his youth. At 15, he had started imitating such Western stars as John Wayne and Walter Brennan, and he would drive up to fast food drive-thru windows and place his orders in character voices, much to the bewilderment of the people at the fast food spots and his friends in the car with him. In college, he worked in TV and radio before moving on to stand-up comedy. In 1982, he worked at a comedy club in Dallas, Texas. Four years later, as per a suggestion from his agent, he moved out to Hollywood, California to try his character voices there. It was here that Farmer assumed the roles of cartoon voices, especially Goofy, whom he has been voicing since early 1987.