Film / Son of the Mask 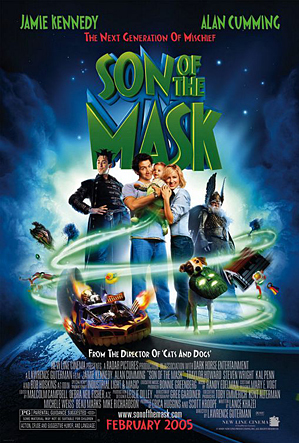 The next generation of mischief...
Advertisement:

Son of the Mask is the 2005 sequel to the 1994 Jim Carrey fantasy comedy The Mask, which was itself based on the Dark Horse Comics series of the same name about a magical green mask that gives strange, almost unlimited powers to anybody who wears it, but also causes them to lose all their inhibitions and self-control. The violent tone of the comics was toned down in the first film adaptation to suit Carrey's comedy stylings, so fans clamoring for a more loyal adaptation were displeased even more when Son of the Mask reduced the style further, to the point of making it (supposedly) family-oriented.

The plot concerns failed cartoonist Tim Avery (Jamie Kennedy), who is afraid of conceiving a child with his wife Tonya (Traylor Howard) because he believes his kid would be ashamed of him and his dead-end job. But then, he gets a hold of the Mask, which works its usual magic, transforming him into the green-faced cartoony maverick that not only becomes the toast of the company party, but also impregnates his wife without his consent. (Not rape, mind you!)

Nine months later, out pops young Alvey Avery, the titular son of the Mask, who's sometimes cute, but mostly an insufferable sadist and smack dab in the middle of the Uncanny Valley. When Tonya leaves town for business, Tim is left taking care of him, and Alvey proceeds to drive his dad totally insane with his bizarre abilities - which he does not need the Mask to use. Joining the battle royale is the family dog, Otis, who wears the Mask and uses its powers to try to kill Alvey because he doesn't want to compete for Tim's attention.