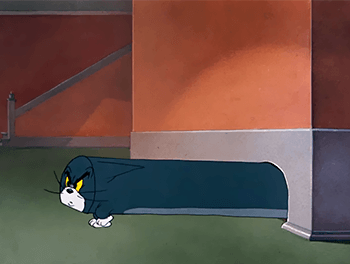 Our understanding of the properties of matter holds that both liquids and gases assume the shape of whatever container they are placed in. This is decidedly not a property of solid materials, which tend to have a definite shape that resists change. Whoever codified these properties, however, neglected to study Toon Physics. The bodies of many cartoon characters, despite seeming as solid as our own, have the tendency to change shape given sufficient force. This may be because many toons are not made of regular flesh and bone, but a combination of extremely strong rubber and a forcemeat-like paste which contains few to no bones to break, organs to damage, or blood to spill. This enables them to accomplish feats of contortion, stretching, and endurance that no living being could.

Or we could just apply Occam's Razor and say, "They can do that because it's funny, stupid."

The Forcibly Formed Physique trope describes situations in which all or part of a character's body is reshaped into an unnatural shape by some kind of force. Some of the more common methods include stretching, molding, extrusionnote a character crams themselves through an opening and emerges in the the shape of the hole, striking, pounding, or being "cut" by a blunt object. Naturally, these physical changes are almost never permanent and rarely stick for more than a few seconds — the character is almost always back to their default shape by the next scene. Rarely, the character is left in this shape when the story concludes, but they're generally back to normal by the next episode.

While this trope appears sporadically in different media, it is most strongly associated with the particular style of Slapstick found in American animated shorts from the The Golden Age of Animation, and later cartoons directly influenced by them. Outside of this specific category of animation, this trope is decidedly less common than you might think, given how it's considered a big part of the visual language of Western animation. Nevertheless, it's both prevalent and influential enough that it's not in any danger of becoming a Forgotten Trope.

For obvious reasons, comedic versions of trope occur almost exclusively in animation and sequential art. Human beings, and most other complex lifeforms, have pesky things like bones that would make this trope impossible to replicate in real life, and difficult to pull off convincingly in even the most whimsical of live-action media. CG has changed this somewhat in recent years, but this involves Medium Blending as CG is itself a form of animation. note While instances of this trope can appear in real life, they only occur in extremely specific situations and/or over a period of months or even years.

Subtrope of Amusing Injuries, though it's worth noting that not all examples of this trope are clearly injuries in the usual sense.

Contrast Rubber Man, in which similar abilities are acknowledged In-Universe as a character's superpower, rather than an occasional by-product of the Rule of Funny. Contrast also Impact Silhouette when someone/thing crashing through/onto a surface leaves a nigh-perfectly shaped imprint or hole onto said surface.

Be careful to remember that this is a Comedy Trope, so all examples should be either neutral or Played for Laughs. For examples of similar phenomena being Played for Horror, see Fold-Spindle Mutilation.

Frank deforms Francis into a cube in order to trick Sandy into calling off the search party for Spongebob. Needless to say, Sandy is not fooled.

Frank deforms Francis into a cube in order to trick Sandy into calling off the search party for Spongebob. Needless to say, Sandy is not fooled.