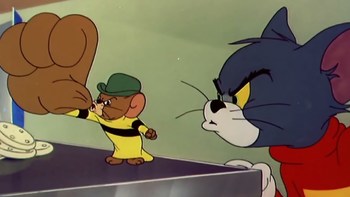 Guess what happens next!

The film starts with one Muscles Mouse kicking the bejesus out of all the cats in "Hogan's Alley". Muscles gets a letter in the mail from his cousin Jerry, pleading for help. Muscles arrives to find Jerry cowering behind his dinner table as Tom chucks dynamite stick after dynamite stick into the mouse hole. The tables are rapidly turned as Muscles the super-mouse goes after Tom.