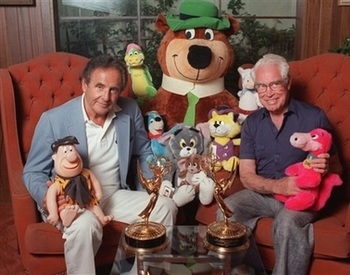 Joseph Barbera (left) and William Hanna (right) with plushes of some of their many characters and a couple of the Emmys their studio won over the years.note  On Barbera and Hanna's knees, respectively: Fred Flintstone and Dino the dinosaur. Middle, back row, L-R: Wally Gator, Yogi Bear, Quick Draw McGraw; front row, L-R: Huckleberry Hound, Tom and Jerry, Top Cat.
Advertisement:

The partnership of William Denby "Bill" Hanna (July 14, 1910 – March 22, 2001) and Joseph Roland "Joe" Barbera (March 24, 1911 – December 18, 2006) (yes, it was not, in fact, created by a woman named Hanna Barbera) began at MGM's animation studio, where the pair created Tom and Jerry and spent almost 20 years directing their cartoon shorts. After MGM got out of the cartoon business in 1957, Hanna and Barbera founded their own studio, which came to dominate Western Animation on television for decades.

The studio's extremely prolific half-century-plus output included classic cartoon series like The Flintstones, The Jetsons, Yogi Bear, Scooby-Doo, Space Ghost, and The Smurfs (1981); the Emmy-winning live-action Made-for-TV Movie The Gathering and a handful of feature films, most namely a popular adaptation of Charlotte's Web. It was also responsible for the infamous live-action acid sequence in KISS Meets the Phantom of the Park, as well as countless other projects.

Hanna-Barbera pioneered the use of many Limited Animation techniques, such as Ring Around the Collar, to produce cartoons on a low budget quickly enough to meet a television schedule. As a result a lot of Hanna-Barbera shows put the emphasis more on the voice acting and the writing/gags than the actual animation process itself. Other animators who have enjoyed better budgets in different circumstances like the Looney Tunes-famed Chuck Jones would dismiss this approach as "Illustrated Radio." These practices allowed them to continue producing works and employing in times where other studios struggled and managed to continue doing so well into the 1980s and 1990s. In 1967, the company was purchased by Ohio-based Taft Broadcasting (yes, related to that Taft), which also owned a bunch of regional theme parks such as King's Island in Ohio and Carowinds in North Carolina, and thus Hanna-Barbera properties became prominent at these parks, lasting for years after Taft spun them off (eventually coming under Paramount ownership, then Cedar Fair; the attractions were rebranded as Nickelodeon-themed rides, and then after Peanuts in later years); after Taft acquired syndication company Worldvision Enterprises (the former ABC Films) in the late 1970s, this meant that not only did H-B have easier access to the syndication market, but Taft's television stations also had a built-in cartoon supply.

In the late 1980s, Taft (which later renamed itself to Great American Broadcasting) faced a lot of internal and financial issues. This had a major impact on the fates of Hanna-Barbera and its siblings. As a way of cutting costs, they began to look to sell off the studios. The first sale happened in 1988, when a buyout was reached for Hanna-Barbera's Australian division. That entity became the Southern Star Group and took the rights of the shows and specials produced by that sub-entity. The problems however still continued, as this lead to an exodus of 80s Hanna-Barbera staff to go help revitalize the Warner Bros. Animation studio. In the early 1990s, GAB decided to put Hanna-Barbera and sister studio Ruby-Spears up for sale as well.

In 1991 a deal was struck between GAB and Turner Broadcasting that resulted in Turner purchasing Hanna-Barbera and its library. Turner also purchased the Ruby-Spears library, but not the studio, which became its own entity again. It was here those libraries merged and the HB shows were united with the predecessor shorts Bill and Joe had done for MGM, but are legally not in the same library. note All Hanna-Barbera and Ruby-Spears shows are listed as property of Hanna-Barbera, whereas Tom and Jerry and other MGM shorts are listed as property of Turner Entertainment Co., though they are free to be co-marketed as much as WB wants; not to mention that Tom and Jerry, in recent years, has been marketed under the Hanna-Barbera name a few times Under the new ownership, everything that was in planning but not funded was put on hold, and in 1992 Turner launched Cartoon Network. The HB libraries and MGM libraries, along with the pre-1948 Looney Tunes library acquired when Turner bought out MGM in 1986note Turner had wanted the entire studio but was met with debt problems. This resulted in him selling off MGM/UA after only 74 days, but he kept the library. The pre-1948 Looney Tunes had been owned by United Artists via Associated Artists Productions, which had bought the entire pre-1948 WB library in the 1950s. This combined library, along with some other material, made up a good chunk of the schedule at the dawn of the network. However, as the channel grew, so did the initiative to bring new original content to the channel. The studio at the time had an influx of younger talent that had been brought in to fill the gap left by the earlier exodus. In 1994, Hanna-Barbera was internally reorganized as Hanna-Barbera Cartoons and with a new sub-entity that began to refocus their efforts towards what was originally called "World Premiere Toons", essentially allowing many of the younger members of the studio to launch their own pilots in the hopes of becoming new original shows. Originally this was only seen as a sub-division while the rest of the studio made their efforts to switch over from other channels. note The animated Dumb and Dumber series, a co-production with corporate sibling New Line Cinema, was the company's final non-Cartoon Network series.

In 1996, Time Warner merged with Turner Broadcasting, putting them under the same corporate roof as Warner Bros.. This reunited a few H-B shows that had been in the hands of Warner Bros.note Namely the Animated Adaptation versions of The Dukes of Hazzard, The Abbott and Costello Show and Ruby-Spears' Police Academy: The Animated Series, and reunited the pre-1948 Looney Tunes with the rest of the library.note The Warner Bros. library (and the rest of Warner Bros. Television, for that matter) is still separate from the Turner and H-B libraries, but can be co-marketed when they wish. From this point Hanna-Barbera was slowly merged into Warner Bros. Animation with the intent that the new company didn't need more than one animation studio. This however didn't go entirely smoothly. note The short version is that basically there were way too many people with different goals trying to be shoved under one roof. You had very pro WB people who didn't want to be associated with HB in any way. You had HB people that felt the new generation disrespected the HB legacy. You had younger employees not wanting to be shackled to the WB or HB legacies. You had WB execs who had helped with Nickelodeon not wanting to work with CN. And you had a lot of people stuck in the middle wanting the whole thing to just end already. Just before the then-imminent death of Bill Hanna in 2001, Cartoon Network programming and the units producing them were spun out into their own entity (Cartoon Network Studios) under the Turner silo and Warner Bros. assumed the production of Scooby-Doo, the company's longest-running franchise and picked up all their legacy properties with Hanna-Barbera credited as the copyright holder under the Warner Bros. silo. By this point in time the Cartoon Cartoon brands had dominated the studio's output in comparison to other general Hanna Barbera productions and from here on out the earliest Cartoon Cartoons (including The Powerpuff Girls (1998))note the final series to use the company's trademark "swirling star" logo (and even then, it was originally done as a throwback, as it was last used in 1992, outside an odd Johnny Bravo episode in 1997, apparently an editing error) stopped being associated with Hanna-Barbera as well.

In 2016, Warner Bros. announced plans to create a Shared Universe of animated films based on Hanna-Barbera properties, provided that the 2020 animated feature SCOOB! does well. SCOOB! presented itself as a modern-set Alternate Continuity, using elements from various HB shows and altering them. Whether the movie launches any sequels is still undetermined, but it has also been noted Warner Bros. hopes this film also leads to a greater presence of Hanna-Barbera characters in the theatrical market, whether they be animated, live-action or hybrid. These also may not all share strict continuity, given comments made by writer Tim Sheridan on how the Scooby writers view continuity and that WB isn't against DC movies being made that are not in the DC Extended Universe.

. This change gives Hanna-Barbera a physical studio presence for the first time in 20 years. The Direct to Video film Straight Outta Nowhere: Scooby-Doo! meets Courage the Cowardly Dog marks the first Crossover between a classic Hanna-Barbera property (Scooby Doo) and a Cartoon Network original show (Courage the Cowardly Dog) since the earliest days of the restructuring. In addition, HBO Max, WarnerMedia's flagship streaming service, hosts material from both the Hanna-Barbera and Cartoon Network libraries.

See Ruby-Spears, Cartoon Network and Warner Bros. Animation for related entities, as well as Wang Film Productions, a Taiwanese studio established for outsourcing by Hanna-Barbera (eventually expanding their services to other companies, too).

has more in depth about the duo, their history and their legacy. Also see Hanna Barbera Australia/Southern Star

on the other wiki for the former Australian unit. See also The Hanna-Barbera Wiki

For a complete list of their shows, check out IMDB.com or TV Tome:

Between 1965 and 1967, H-B dabbled in the music industry with Hanna-Barbera Records. While many HBR releases were based on the studio's cartoons, the label also had an eclectic pop roster which included Scatman Crothers, Paul Frees, and The 13th Floor Elevators. Read the HBR story here

Hanna-Barbera as a company and its works provide examples of: