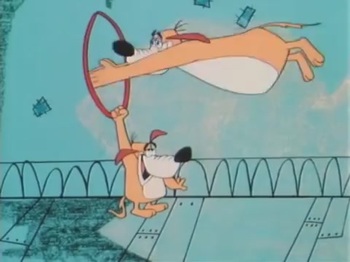 The Bungle Brothers was a short series of bumpers on The Kwicky Koala Show, unlike the usual set of the show as Three Shorts. They were brief gags that would air before each longer segment.
Advertisement:

In each segment, George and Joey would practice their latest performance in a circus or vaudeville-type setup. As their name implies, one way or another something would happen to bungle it up.

All right, Joey, let's show the people our tropes.