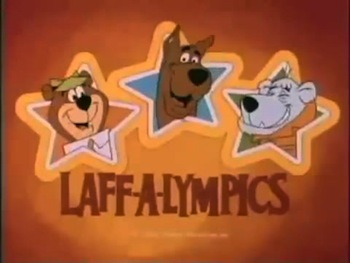 This Hanna-Barbera series from the 1970s was a Saturday Morning Cartoon version of ABC's Battle of the Network Starsnote which also parodies the Olympics, which were held the previous year. The three teams were:

Snagglepuss and Mildew Wolf provided commentary as the teams engaged in various contests of skill and endurance. Fred Flintstone, Barney Rubble, and Jabberjaw made occasional guest appearances as judges.