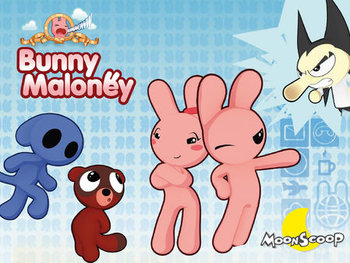 Bunny Maloney is an All-CGI Cartoon produced by MoonScoop (currently known as Splash Entertainment, the studio responsible for the more famous Code Lyoko).

This series focuses on Bunnyville's famous ProtecTeam. It consists of the titular Bunny Maloney, the lazy boor who truly cares for his friends despite appearances, Candy Bunny, a domineering brat who also has a hidden heart of gold, and Jean-François, a mysterious blue creature who can only say his own name. Together, they are a crime-fighting group who'd much rather be focused on their own selfish pursuits, be public relations, shopping, or whatever other common sitcom situations they end up involved in.

On the occasions there is some crime to be stopped, it's usually the ineffectual, submarine-piloting Professor Débilouman who is the culprit. Bunny and co. unleash their mech, the Bunnyganger, to save the day, Débilouman goes down with his sub and the process repeats ad nauseum every week.

It's a very strange show, to say the least.