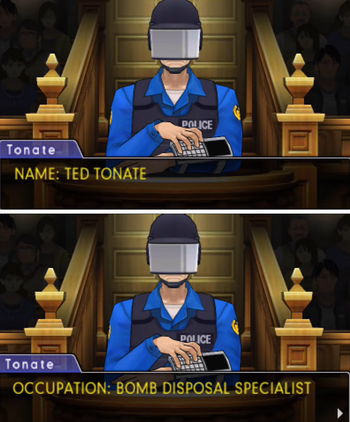 "As they come around now for the bell lap. Rooin Mahmood the Indian, Pissenmiov the Russian, just behind, the Italian, Beinsilli... there's another runner there on the inside, Whoskrapisdacsz from Poland, and dropping away now, the Swede, Lars Persson."
— The Twelfth Man, "Bruce 2000"

Pun names are just that: Names that make puns. They don't have to be Meaningful Names, but often are. An overlap would be a baseball player named Homer (of which there have been several actual Major League Baseball players with that moniker, although a few were pitchers).

A subtrope is Sir Verb-a-Lot. Another subtrope, for TV or radio stations with punny names, is WPUN. Camp Wackyname is also a subtrope, and "Miss X" Pun is one when used for names. If the name is a Double Entendre, then it's a Euphemistic Name. If a lot of characters in a given work have a punny name, it could be an example of Punny Theme Naming. If a group of people's last names forms a pun, it could relate to The Law Firm of Pun, Pun, and Wordplay. Also overlaps often with Real Joke Name, where someone laughs at what they think is a pun only to be told that that's actually the character's real name. (And they've Never Heard That One Before.)

If it's a title, then it's Pun-Based Title. If it's the name of an entire species designed around the pun, see Pun-Based Creature.

The Head Don introduces Peter to the other Dons of the nearby mafias. Naturally, their names are all puns (the Head Don's name is not revealed).

The Head Don introduces Peter to the other Dons of the nearby mafias. Naturally, their names are all puns (the Head Don's name is not revealed).