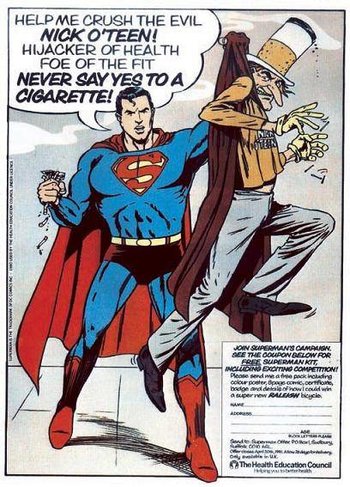 "Superman vs. Nick O'Teen" is an advertising campaign started by the Health Education Council that ran in The '80s. It consisted of a series of televised and written ads starring Superman, as he repeatedly thwarts the evil plans of a character named Nick O'Teen, a typical top hat and cape-wearing villain, who continually tries to give cigarettes to children.

The print ads were published in magazines and comic books. The three televised ads were traditionally-animated Public Service Announcements by Richard Williams' studio. The shorts are quite notable for their high-quality animation, largely provided by Eric Goldberg.

You can watch all three ads here

"That's why I never say yes to a cigarette."
Feedback

That's how hard it is.

And that's why I never say yes to a cigarette.

Example of:
Must Have Nicotine

That's how hard it is.

And that's why I never say yes to a cigarette.