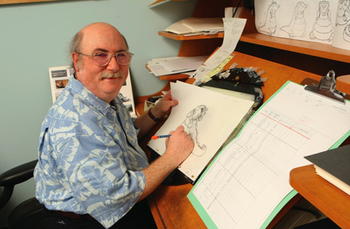 Eric Goldberg (born May 1, 1955) is one of the modern masters of animation, noted for his bouncy and rhythmic style, a callback to the great animation masters of the past.

He started out at Richard Williams' studio in the late 1970s, where he gained tips and from several Golden Age animators who worked there, including Art Babbitt, Ken Harris and Gerry Chiniquy. In the early 1990s, he arrived at the Walt Disney Studios, where his first assignment would be animating the wacky Genie in Aladdin. Afterward, he co-directed the animated feature Pocahontas, while continuing to animate on films as Hercules and Fantasia 2000, as well as some of Chuck Jones' final shorts. In the early 2000s, he served as animation director for Looney Tunes: Back in Action as a personal tribute to Jones. He, along with Mark Henn and Randy Haycock, is presently the only 2D animator from the studio's "Renaissance" era still working at Disney.

Aside from features, Goldberg animated for several attractions in Disney's theme parks, including a CGI version of Genie for Tokyo DisneySea's Magic Lamp Theater and 2D animation of Donald Duck, Jose Carioca and Panchito for Epcot's Gran Fiesta Tour.

In 2008, he published the Character Animation Crash Course, a how-to book containing his acquired tips about the ins and outs of making animated films, which has been acclaimed by amateurs and professionals alike as one of the best books on animation out there.