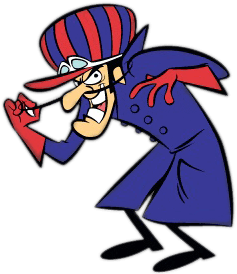 Just throwing it out there, but this guy looks pretty evil.
"The vizier twirled his mustache, probably foreclosing another dozen mortgages."
— Sourcery
Advertisement:

Bah! Curses! But though I be foiled to-day, my proud beauty, a time will come! Ha-ha! (Boo! Hiss!)

An oddly specific kind of character, the Dastardly Whiplash is a cartoonish villain taken from the silent film tradition (or really from the old stage melodrama tradition). Usually a Man of Wealth and Taste, in Great Britain (*cough Evil Brit cough*), he was generally a Bad Baronet; in the U.S., he (and it is in fact always a he, as the mustache is an important part of the aesthetic) was often an Evil Banker who held the mortgage on the heroine's farm. Physically, he's slightly hunched with an exaggerated nose and chin, a curling black moustache (all the better to twirl at you, my dear), and an elaborate costume, usually an old-fashioned black suit with a Black Cloak (maybe even an Ominous Opera Cape) and a hat, usually a top hat but occasionally a Dastardly Dapper Derby.

In personality, he is a one-dimensional, over-the-top, openly evil villain of limited intelligence who comes up with (sometimes absurdly) elaborate schemes for the hero to foil — kidnapping a helpless female and tying her up to either a railroad track or a Conveyor Belt o' Doom, in an attempt to coerce her into "marrying" him or relinquishing the deed to her property, is the old standard. He can usually be expected to go to great lengths to cheat at things he could easily win legitimately, purely For the Evulz. He also is prone to fits of nasal laughter ("Nyehehehehe!!").

He generally has two moods: when happy, he sneers, cackles, and rubs his hands in malevolent glee, and when unhappy, he glowers, sulks, makes a fist, bites his index finger and snaps at his sidekick or henchman, should he have any. He tends to speak largely in Antiquated Linguistics, preferring such expletives as "Curses! Foiled again!", "Blast!", and "Drrrat!" (or, for extreme cases, "Drat and double drat!"). Despite his menacing appearance and demeanor, he often turns out to be a Harmless Villain.

Expect his musical cue to be "Mysterioso Pizzicato"

This trope is almost never played straight today. The Dastardly Whiplash is well on his way to being a Dead Horse Trope, having been largely replaced by the likes of the Villain with Good Publicity, although some modern works will still use him for sheer camp value, or for a one-off meta gag about stereotypical villains. The look, however, is far from dead amongst the "bear" subculture. note They could be going for The Strongman look, though, which often sported a nice handlebar mustache as well. Bonus points if one of his names is an adverb. Pantomime Villains often fit this trope, as they need to convey villainy without any dialogue or props.

The Repulsive Ringmaster often shares characteristics with this trope, such as the top hat and mustache. On the other hand, the Stage Magician wears a very similar outfit but isn't necessarily a villain.

Subtrope of Card-Carrying Villain and Obviously Evil; one of the more likely characters to play into Evil Is Hammy. (If the character doesn't have the specific appearance of a Dastardly Whiplash, it's probably one of those tropes instead.) If it's treated as a surprise twist that he's a villain, that's an overlap with Obvious Judas.

The Trope Namer is a combination of Snidely Whiplash (from Dudley Do-Right) and Dick Dastardly (of Wacky Races).

Real Life examples? No thank you. In Real Life, even the Card Carrying Villains are more complex than this.