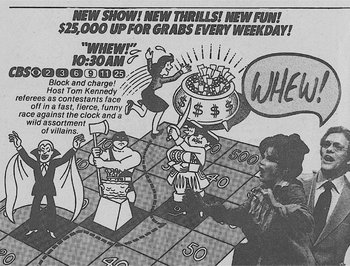 Game Show created by former Jeopardy! contestant Jay Wolpert, and one of his first works after leaving Mark Goodson-Bill Todman Productions. Hosted by Tom Kennedy, the show premiered on CBS on April 23, 1979.

The rules... oh, boy. (Whew!) Stay with us here. In each round, one contestant played an offensive role (the "Charger"), and the other played defense (the "Blocker"). The board had five "levels" of five boxes each with dollar amounts from $10 to $50, plus a sixth with three worth $200, $350 and $500. The Charger's goal was to advance up the board in 60 seconds by correctly solving "bloopers" — clues containing a humorously-incorrect statement (e.g., "Bob Barker is the host of The Price Is Too Damn High", with the correct answer being The Price Is Right). If the Charger answered incorrectly, they could try another clue in the row.

Before the Charger started to play, though, the Blocker hid six "Blocks" on the board (no more than three in a row on the first five levels, and no more than one in the sixth row), which imposed a five-second penalty if hit. If the Charger was running out of time and hadn't yet reached the sixth level, they could call a "Longshot" and skip right to that row — however, the Blocker got to place an extra block using one of three "secret buttons". The Charger won the round either by advancing through all six levels, or by calling a Longshot and then finding/correcting a blooper. If the Charger ran out of time, or called a Longshot and then either missed a blooper or hit a block, the Blocker won. Games were played best-of-three, with the players switching roles each round and the champion deciding who played which role in the third round if needed.

On November 5, 1979, the format was slightly altered to use teams of one contestant and one celebrity. This venture, appropriately called Celebrity Whew! and originally promoted to run for three weeks, ended up remaining until the show's end on May 30, 1980. Among those who participated were Trish Stewart, Jamie Farr, Gary Collins, Mary Ann Mobley, Robert Vaughn, Marcia Wallace, John Saxon, and Betty White.

Whew! was initially aired against NBC's All-Star Secrets, which Whew! handily outperformed. NBC then moved The Hollywood Squares into the timeslot- with Squares winning the ratings battle decisively (although Squares would end a month after Whew! did). Its cancellation left CBS with only one game show — The Price Is Right — from June 1980 through January 1982, when Tattletales returned to the network's daytime schedule.

In September 2021, after being absent from the airwaves for four decades, Whew! began airing on Buzzr.

"The show Whew! is best described by these TROOPSnote Tropes":

This is Rod Roddy speaking! ''Whew!'' is a production of the Bud Austin Company! Stay tuned for ''The Price Is Right'', following the news, over most of these CBS stations!