Music / The Cog Is Dead 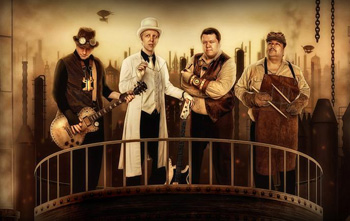 As we've sailed through the tunnels of time/Spreading our message in songs/We've seen many wonders and heard many tales/Of future and times now far gone
Advertisement:

The Cog Is Dead is a Steampunk band from Florida whose musical styles range between folk, rock'n'roll, ragtime, reggae and beyond. Like Abney Park, their fictional backstory is that of a roaming airship crew, with the twist that they also travel through time. To date they have released four studio albums: Steam Powered Stories (2010), Full Steam Ahead (2013), Carnival of Clockwork (2015) and Songs Of the People (2019). Their lineup:

The Cog Is Dead and their music provide examples of: