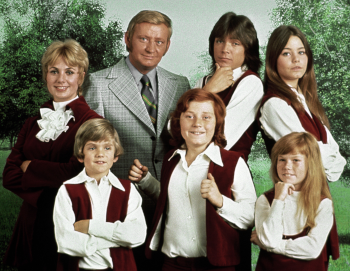 Six Partridges; no pear tree, just a manager.
Shirley: Tracy, don't put that drumstick up your nose!
Tracy: Why not?
Shirley: You don't know where it's been!
Advertisement:

This 1970-74 half-hour Sitcom was part of ABC's Friday night lineup and is inextricably bound to The Brady Bunch, its companion in the previous time slot, in the minds of those old enough to have seen it during its original run. It depicted the life and adventures of a family Garage Band that suddenly got their big break and shot to top 40 success after adding their thirty-something mother to the lineup. The cast featured Hollywood favorite Shirley Jones (best known up to this point for her roles in a number of classic movie musicals) and Dave Madden, a veteran of Rowan and Martin's Laugh-In. The series also featured Jones' stepson David Cassidy, whom it subsequently launched into brief but intense teen idol superstardom. Also included in the young cast were future star Susan Dey (later of L.A. Law) and future scandal-wracked DJ Danny Bonaduce.

Like The Monkees before it, The Partridge Family was predicated on its music, and like The Monkees early days the music was created almost entirely independently of the cast. Unlike the work of Messrs. Dolenz, Jones, Nesmith and Tork, this never changed through the life of the show/group. The majority of the songs were performed by studio musicians and vocalists, with Cassidy and Jones adding lead and background vocals respectively. Producer/songwriter Wes Farrell led the studio artists and essentially created the sound of the Partridge Family. The actual songs were written by a collective of successful pop song writers, including Tony Romeo, Terry Cashman, Tommy West, Barry Mann, and Cynthia Weil.

The Partridge Family was originally proposed as a vehicle for the real-world family rock group The Cowsills (famous for their hits "Indian Lake," "The Rain, The Park and Other Things," and "Hair"). However, the erstwhile producers determined that the Cowsills, while musically talented, were not charismatic enough to carry a television series except for the youngest girl; furthermore, they felt the children were all already too grown up for their plans. The Cowsills' involvement was quickly abandoned and the concept retooled to focus on a fictional family band. Alternately, some accounts claim that the Cowsills walked out on the project on their own accord when the producers refused to use their mother, Barbara, and cast Shirley Jones instead, or that the producers got fed up with the Cowsills' Jerkass Stage Dad Bud and dropped the band.