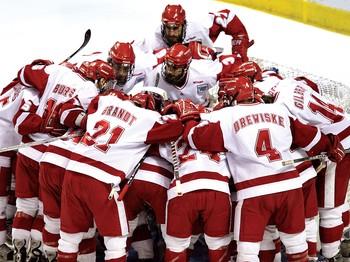 "Whose hand is that?"
"I've got just the thing! Now, huddle up boys, and make that old whispering sound!"
— Marshie, Homestar Runner, "The Animated Adventures of Puppet Homestar"

WE NEED A DESCRIPTION! TROPER HUDDLE!

Planning a Zany Scheme? Huddle! Organizing an infiltration? Huddle! Have to get your team fired up for the game-winning Hail Mary toss? Huddle! Want to discuss whether or not you should let The Mole back on the team? Huddle! Huddles solve everything!

If the audience is a part of it, there will be a Huddle Shot. We will hear everyone's concerns as they whisper back and forth.

If the audience is not privy to the huddle, we will instead see a far shot of everyone squished together. There will be indecipherable whispering. Occasionally, especially in cartoons, one person will look up at whoever/whatever it is they're all talking about, before being dragged down by a fellow huddler. This version of the huddle follows the Unspoken Plan Guarantee— that is, because the audience doesn't know what's about to happen, the plans will go smoothly.

Fun fact: the huddle can be traced back to the 1890's when Gallaudet College's Paul Hubbard began using it during games that his American football team was in. Which was useful, since the college is made up of deaf students and the huddle enabled him to communicate to his teammates without opposing players being able to see his hand signals.

May be accompanied by a Team Hand-Stack.