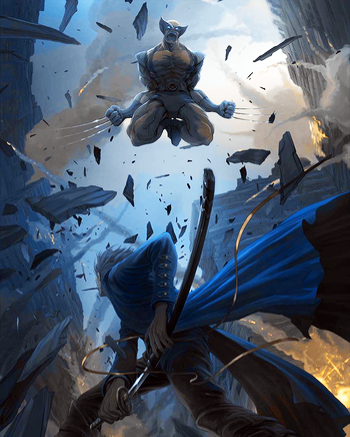 My body is ready, bub.
A Stock Pose common in video games, covers, and art. It features one character about to exchange blows with another one; the angle doesn't matter, but it's usually shot Over the Shoulder.
Advertisement:

One side typically looks as if it has an advantage. Other instances feature a sense of symmetry by having the characters balance each other out; whether by having a superior-looking weapon against an intimidating looking "partner", or by having both look like they can kick each other's butt.

This isn't limited to covers and still art. Motion pictures can also make use of this in the form of Hit Stop, where instead of Overcranking and stopping on impact, they stop it when they're about to hit.

Thematically, it emphasizes impending conflict or battle. Sometimes Rule of Cool applies when the battle is ongoing and the fighters are about to unleash fiercer blows to each other.

Closely related to Charge-into-Combat Cut, but instead of cutting into something else, it simply just cuts to end scene altogether if it does cut after the pre-clash. See also Mirrored Confrontation Shot, which is similarly about impending conflict, contrast with Fearful Symmetry, where the participants are already at it. Related to Hit Stop, which is used for emphasizing impact. Compare Versus Character Splash, where character portraits juxtaposed to each others are used as prelude to a fight in Video Games.