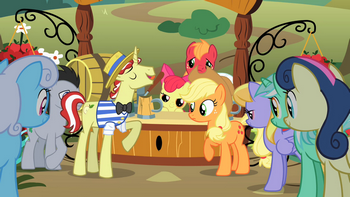 You got trouble, right here in Ponyville!
With a capital T, and that rhymes with C
And that stands for cider!
Flim: Well, lookie what we got here, brother of mine
It's the same in every town.
Ponies with thirsty throats, dry tongues
And not a drop of cider to be found!
Maybe they're not aware
that there's really no need for this teary despair?
Flam: That the key that they need
To solve the sad cider shortage you and I will share!
Advertisement:
Written by M.A. Larson

Sweet Apple Cider Season is starting! Rainbow Dash has been waiting all year for this, and she's determined to get some cider before they run out, as happens every cider season going back for years - and especially to beat Pinkie to the punch, as she's always the first in line, and buys multiple mugs full. Despite Rainbow arriving at dawn, Pinkie is at the head of a long line of ponies who camped out, so it plays out the same as every year: Pinkie gets her several mugs, and the Apples sell the last barrel just before Rainbow reaches the counter, with other ponies still in line who are none too pleased about the situation. Rainbow Dash riles up the crowd to berate the Apples for never having enough cider.

Cue the Flim Flam brothers rolling into Ponyville. They charm and schmooze their way into the town's good graces and introduce The Super Speedy Cider Squeezy 6000, which they claim can make enough cider to satisfy all of Ponyville in a fraction of the time the Apples can even make their daily batch! The Apples maintain their position that quality is more important than speed, but the brothers quickly prove that their machine can make very good cider, thanks to its built-in quality check system that only uses the best apples and automatically discards the rotten or bruised ones. The brothers offer a "partnership," but when the Apples refuse their blatantly lopsided deal, the two groups make a bet: Whoever can make the most barrels of cider in one hour gets exclusive selling rights in Ponyville! This means if the Apples lose, they'll lose the right to sell cider in Ponyville, and without that money to tide them over in the winter, they won't be able to afford to run Sweet Apple Acres!

Once the contest starts, the Apples aren't doing too well, but Twilight and the others join the Apples and help them get a lead on the Flim Flam brothers. Fearing that they will lose, the Flim Flam brothers double the speed of their machine, which causes the machine to suck in an entire apple tree at a time. This makes nearly all of the apples pass as "bad" in the machine's quality control, so to increase productivity, they turn the quality control off.

The hour is up, and the Mayor counts the barrels...and the Flim Flam brothers have won by a considerable margin.

Having lost their rights to sell in Ponyville, the Apples are despondent. The Flim Flam Brothers openly mock them for their loss and decide to rename the farm Flim Flam Fields, much to the visible upset of Rainbow and Ponyville. The brothers then celebrate by letting everypony try the cider. Since the quality control was turned off, no one likes the brothers' rotten-apple- and twig-infested cider, and they refuse to pay for it! Seeing that their product isn't wanted, and also fearing an angry mob, the Flim Flam brothers promptly skip town, returning Sweet Apple Acres to the Apple Family.

As the episode draws to a closenote and as Rainbow Dash finally gets a mug of cider, Applejack writes her letter...

Dear Princess Celestia, I wanted to share my thoughts with you... *ahem* I didn't learn anything! Ha, I was right all along! If you take yer time to do things the right way, yer work'll speak fer itself. Sure, I could tell you I learned somethin' about how my friends are always there ta help me, and I can count on them no matter what, but, truth is, I knew that already too.