Cut His Heart Out with a Spoon 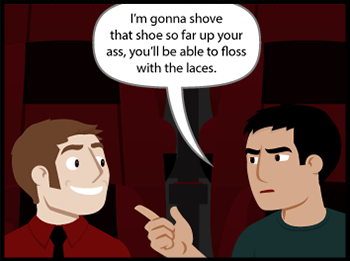 "Locksley! I'm going to cut your heart out with a spoon!"
— The Sheriff of Nottingham, Robin Hood: Prince of Thieves
Advertisement:

This trope is when a threat — usually a death threat — is Played for Laughs by being a bit, well, odd. This can include a threat that's unnecessarily long and convoluted, and the one making it gets a bit lost; or a threat that simply incorporates some really bizarre elements; or a pathetically nonthreatening sort of threat. ("Do X, or I'll... give you some really evil looks when your back is turned!")

Sometimes, Fridge Horror makes the more bizarre elements even more terrifying and Squickier. It's one thing to threaten someone with a sharp knife or even a gun; those cut pretty quickly and can be almost painless (at first; ever heard of the term "clean cut"?). However, going after someone with a spoon dictates hours of potential digging into a person very crudely to get the same effect. Rusty and/or dull cutlery seems to be a particular favorite, though.

This trope is usually seen in comedy, for obvious reasons.

A Super-Trope to I Will Tear Your Arms Off. See also Cool and Unusual Punishment or Cruel and Unusual Death, for when these bizarre threats are actually effective. To the Pain is usually invoked if played seriously, I'll Kill You! when it's not so convoluted. See Freudian Threat for when the threat focuses specifically on a character's naughty bits. Compare Once Killed a Man with a Noodle Implement and Flowery Insults.

Anais tries to prove to Jamie that she can be bad, it doesn't work.

Alternative Title(s): Cut Your Heart Out With A Spoon

Anais tries to prove to Jamie that she can be bad, it doesn't work.