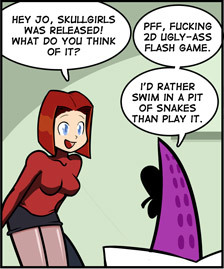 "He'd rather have a buffalo take a diarrhea dump in his ear
He'd rather eat the rotten asshole of a road-killed skunk and down it with beer"
— Theme song, The Angry Video Game Nerd
Advertisement:

You want me to describe another trope? I'd rather drink Brain Bleach!

A character expresses his displeasure for an idea by claiming a preferred alternative — except that alternative is clearly something the average person would find unthinkably undesirable, usually subjecting oneself to pain. This is mainly a Comedy Trope, deriving humor from the exaggerated, ridiculous description of unusual torture and possibly from Cool and Unusual Punishment. Can be a type of Freudian Slip or Suspiciously Specific Denial if the audience knows the character would actually find the mentioned activity enjoyable (even though most people wouldn't). If used in this manner expect the character to be objecting to something rather trivial. Even if it's not this, in especially comedic works expect another character to accuse the objector of doing this.

Commonly used to respond to the advances of an Abhorrent Admirer or Casanova Wannabe. Also commonly used by Caustic Critics to describe the painful badness of what they're reviewing.

Compare I Need to Go Iron My Dog as more mundane excuses, and Cut His Heart Out with a Spoon given the outlandish things people often say they would rather experience. Contrast Fate Worse than Death as a more serious comparison. Anything but That! is another negative (over)reaction, though usually to threats. I'm Thinking It Over! is the related comedy trope where two lopsided alternatives are presented, and the character takes far too long to choose between them. If eventually forced into an undesirable situation, it might become Too Desperate to Be Picky.