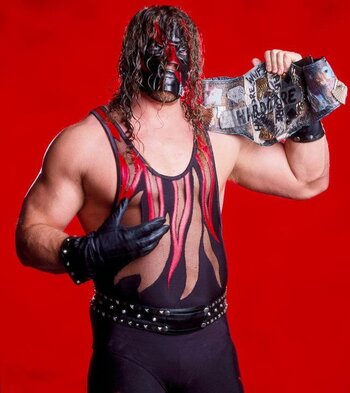 The Devil's favorite demon.
"To all those people who call me inhuman...who call me a freak, who call me a monster...I want to prove them right.”
Advertisement:

Glenn Thomas Jacobs (born April 26, 1967) is a Spanish-born American professional wrestler, teacher, and politician trained by Ray Candy who is best known for a stint in WWE under the name Kane. He is one of WWE's longest-tenured superstars, with the gimmick having debuted in 1997 (and having worked for WWE a number of times prior to the Kane gimmick); in Kayfabe, Kane is the half-brother of The Undertaker, with Kane's father being Undertaker's former manager Paul Bearer (the "Brothers of Destruction" shared the same mother). He was originally thought to be dead, due to a fire started by the Undertaker that also claimed the lives of his parents, before Paul Bearer brought him back. Since their initial feud, Kane and Undertaker have both teamed up and feuded again several times.

Over his long, long career, Jacobs has wrestled as a mad bomber (the Unabomber was A Thing at the time), a depraved dentist, and a replacement Diesel after the original jumped ship to WCW. Currently, he is most famous for wrestling as a maimed, masked slasher villain; in 2003, he went sans fards (and bald), revealing his supposed injuries from the fire were more like mental scars. Audience reaction to the makeover was mixed. In late 2011, he started wearing a mask again, but that ship had sailed, so in 2013 he switched to his "Citizen Kane" attire, symbolizing his cynical new alliance with The Authority.

Kane's kayfabe history is a little... convoluted... so you can check out this special two

on 411mania that does its best to cover Kane's kayfabe history (it even works Glenn Jacobs' gimmicks prior to Kane into the kayfabe) up to 2013.

In August 2018, Jacobs was elected Mayor of Knox County, Tennessee

, adding to the long list of professions of the Big Red Machine.

Example of:
Red and Black and Evil All Over