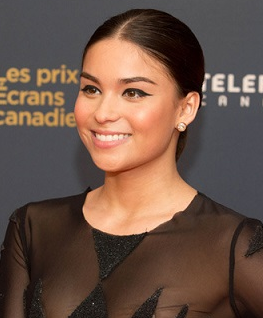 Kawennáhere Devery Jacobs (born August 8th 1993; occasionally credited as Devery Jacobs) is a Canadian indigenous actress from the Kahnawá:ke band of Mohawks. She broke out as the lead character of Rhymes for Young Ghouls. She has had recurring roles in genre films and TV, such as Lilith Bathory on The Order and Sam Blackcrow on American Gods (2017), and is a frequent face in Native and indigenous-centric works like Blood Quantum, Rutherford Falls, and Reservation Dogs. She is also queer.