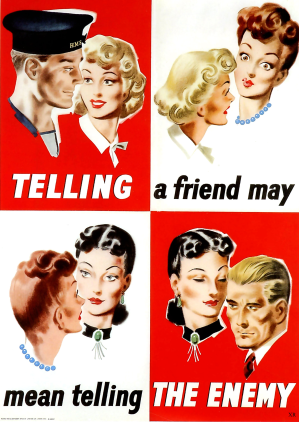 .
"Three can keep a secret, if two of them are dead."
— Benjamin Franklin
Advertisement:

When someone gives away sensitive information unintentionally because they can't keep it to themselves. The Trope Namer is the famous slogan from World War II "Loose Lips Sink Ships".

Very much Truth in Television, and something constantly warned about in the armed forces around the world, as you can never tell when the person on the street you are talking to might secretly be an espionage agent.

Because Technology Marches On, it's even easier than ever to get people killed by running your mouth off, thanks to websites such as Twitter, Facebook, TV Tropes, and that other wiki. Always beware that when you talk about something that is privileged or secret, you might as well be standing on a rooftop with a big sign and a megaphone.

A real danger, even if you don't live in a City of Spies, particularly if you unwittingly work near The Mole or are the target of a Honey Trap (a warning commonly given to members of the military when they are going out into town: "If a girl acts interested in you, and if you're ugly, then it's a trick.").

When this is subverted, it can become Feed the Mole. A subtrope of Saying Too Much. See also Endangering News Broadcast when it happens to be broadcasted unintentionally. He Knows Too Much is when a villain decides to off a potential threat to prevent this trope from happening.

See Cannot Keep a Secret for characters who tend to do this all the time. Compare Idiotic Partner Confession and I'll Never Tell You What I'm Telling You! for even less intelligent versions.

Squidward threatens to report Plankton for stealing business from Mr. Krabs, prompting him to activate a backup plan.

Squidward threatens to report Plankton for stealing business from Mr. Krabs, prompting him to activate a backup plan.